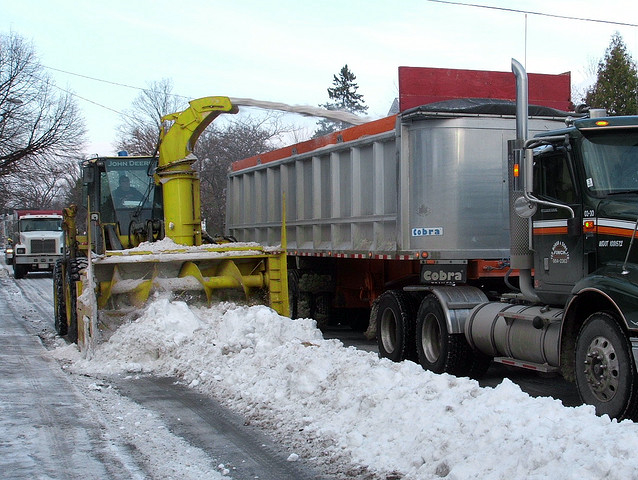 Those who were dreaming of a white Christmas were pretty disappointed last month.  As you’ll recall, unseasonably high temperatures resulted in the closure of numerous outdoor rinks, and made for near perfect driving conditions over the holidays. Last week however, Old Man Winter finally reared his snow-capped head, forcing Kingstonians out of hibernation to clear their driveways and sidewalks on three separate occasions.  It looks as though the white stuff is here to stay, while folks were taking full advantage this past weekend, participating in cross country skiing, outdoor skating and even the odd snow ball fight.  Now that we’ve endured our first series of snow squalls, and witnessed the response from our neighbours and Public Works respectively, this week’s poll asks:

How can snow removal be improved in Kingston?

Kingston has four distinct snowplow designations, which determine how fast the City is supposed to de-ice, sand and plow a given street.  Do you know where your home falls on the list?  Moreover, does the City meet the timings specified for your neighbourhood’s designation?  Please keep in mind that the City of Kingston asks all residents to do their part by removing snow and ice from the “crossings” around their property within 24 hours after a given storm.  Are your neighbours diligent shovellers, or are you fearful that they’re going to contact the City’s bylaw enforcement office (613-546-4291, ext. 3135) to report unsafe conditions surrounding your property?

In addition to answering this week’s poll question above, I’d really appreciate it if you would share your winter safety concerns, or a humorous snow plow-related anecdote with a comment or two.  What are the snow clearance problems in your neighbourhood?  How does Kingston compare to other cities you’ve witnessed responding to snowmaggedon?

Thanks to Urban Eyes for today’s photo.

9 thoughts on “Snow Removal in Kingston”