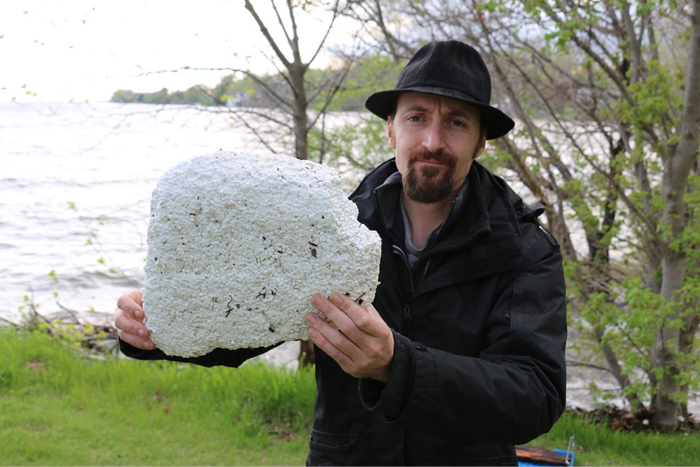 Today was a day much like any other; I woke, pondered, and set out to discover another adventure. Finding myself creatively inspired by the newly increased shorelines, I walked aimlessly down by the waterfront. What once was a spot where my step-father would rest his towel for an afternoon swim after cutting the lawn, was now fully submerged by the dark blue waters of Lake Ontario.

As I walked the shorelines, looking for interestingly shaped/colored pieces of driftwood, I came across a number of various sizes of Styrofoam, plastic, and general garbage. The shorelines of Kingston have always played a role in removing unwanted debris from the lake; now, more so than ever, we are seeing an unprecedented amount of garbage from increased water levels coming down the connected waterways. This debris will only stay on the shoreline for so long before it washes back and litters the rest of Lake Ontario.

Most of the areas that are in need of cleaning require proper attire such as hip or chest waders; because simple rubber boots just won’t cut it. What were once managed shorelines have now turned into flooded disaster areas. There are not enough public employees to maintain each problematic area; it is very important to pick up this debris as it is discovered.

Many people are aware of the current state of rising waters within the Kingston area. The focus has been directed towards local businesses and homeowners who are dealing with the floods; we need to remember that this Great Lake is a massive body of water that feeds into the ocean and comes across an unimaginable amount of water-life. Floating debris, such as the large piece of Styrofoam seen in the photo above, can have grave effects. This one piece can easily break into millions of smaller, non-digestible, pieces that pollute our waterways and weigh heavily on the local ecosystem.

Many people arrived while we were cleaning the shoreline, some just to watch the sun as it began to set. Others came with their rod and reel to cast a few lines, with hopes of a big catch. It appeared that nobody knew this debris was starting to cover the shoreline and that there was an opportunity for them to lend a hand in cleaning it up.

As Kingstonians, we pride ourselves in the attention we pay to our city and the surrounding environment. Every year, I see many people donating their time and removing debris from the sides of roads and walkways. With this year’s unprecedented water levels, we need to look towards our shorelines. Volunteers who are able to spend time picking up the debris will make a significant impact on the local ecosystem. I urge you to carry a spare bag and be prepared to donate time when you see the opportunity. You will feel good about yourself and the environment will thank you for it. Kingston will thank you for it.
_____________________________________
Submitted to Kingstonist’s Community Soapbox by Bon Evans.