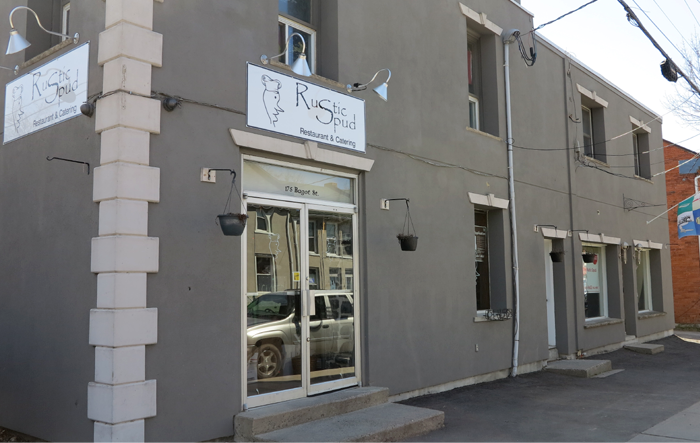 Potatoes are the chameleons of the food world. Puree them into an elegant accompaniment for a fancy roast dinner. Scallop them to fill out a workaday supper. Deep fry them to indulge a Saturday late-night craving. Then bake one whole as penance on Sunday.

Such shapeshifting is central to the philosophy behind the Rustic Spud (whose name has no more to do with its menu than does Le Chien Noir’s), a new restaurant set to open in late April on the quiet corner of Bagot and William Streets. “My approach to food is a bit like fashion,” says chef and co-owner Joel Lattimore. “It’s more fun when you keep things changing.” As for the name, he explains, “the spud is this quintessentially Canadian thing. It’s sort of a fun word and we want to bring some of that into the restaurant. Coincidentally, the ‘rustic’ part also fits with the space.” The tables and bar top comprise thick slabs of varnished rough-hewn timber, the walls are limestone, and the bottle rack behind the bar, Lattimore tells me with a touch of pride, was welded by Collins Bay inmates. Yes, there is a rustic charm.

“We’re calling it ‘artisan’ cooking,” he says, standing in front of a round wooden sign on the wall that shouts EAT, while across the restaurant another proclaims SIMPLIFY—but he’s quick to add that he’s not a hardliner. “Let’s say our food is as local as possible. We use products that stand behind their name and their claims to genuineness. He describes his food as “true Canadian cuisine,” explaining that “our country is built on a little bit of everything, populated by people from everywhere, and the food follows. We don’t want to get stuck behind a label like ‘Mediterranean’ or ‘Irish.’ We want to be multicultural, diverse.”

With his father Scott as a business partner, Joel launched the Rustic Spud as a catering company four years ago, but owning a restaurant is new territory. I wonder aloud whether they’re at all daunted at the prospect of setting up shop in an almost exclusively residential neighborhood. They are not. For one thing, they’ve got their bases covered with the catering operation. What’s more, says Scott—who has a lifetime of experience running family businesses in the Kingston area—“we can adjust our price point accordingly because we don’t have the overhead others have.” He also sees the location as strategic. “We’re sandwiched between two beautiful residential streets halfway between the university and downtown. Students and professionals are walking by here all the time, and this is the perfect place for them to stop and grab a bite to eat.”

Joel started cooking in high school. After apprenticing with Wooden Heads for five years and earning his Red Seal, he helped open Michael Smith’s Canadian Grilling Company at Queen’s, where he was executive chef for three years. With his father’s help, he started the catering business as something to do in the summer. The pair have been toying with the idea of launching their own eatery for a while, and when this location became available something clicked.

The Rustic Spud will be open from seven a.m. until whenever business naturally winds down in the evenings. Breakfast will be divided into express options, for those in a hurry, and a brunchier mains list for the lingering crowd. Later in the day, there will always be a build-your-own-pizza option, in addition to a full lunch and dinner menu serving up variety of apps (roasted carrot, squash, and ginger soup; fried oysters; bacon and smoke-blue-cheese scallops), mains (gnocchi, veal saltimbocca, seared sirloin, braised short ribs), and paninis. Joel reminds me that the menu will change often and that full-service takeout is available. As a final foodie touch, the Rustic Spud will be retailing artisan breads, baked fresh daily, from the Bread~Man Bakery, as well as pickles and preserves of Joel’s own concoction. Guests can look forward to finding these products in the restaurant’s cookery too.

Doors open any day now, so keep an eye out. I will report back once I’ve had a chance to sample Joel’s magic in the kitchen.