Skip to content
October 25, 2011June 14, 2017 Danielle Lennon
Ly’s Place is permanently closed. Looking for a place that’s still open? Check out our restaurant reviews and recommendations for establishments that are still open and serving great food in Kingston. 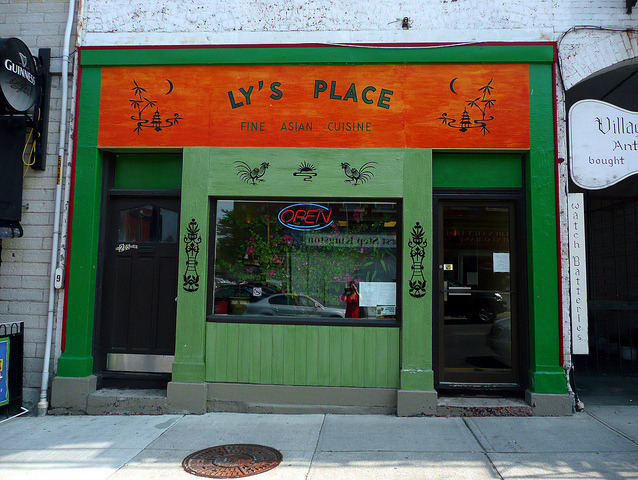 Back in August I visited Ly’s Place with a friend for a mid-week lunch date.  This restaurant located next to The Iron Duke, although new to me, has been there for three years now.  The owner, Cuong Ly, had been cooking in Kingston for over 20 years as one of the chefs at Chez Piggy.  A few years ago he decided it was time for a project of his own so he opened Ly’s Place (pronounced, “lee”, as opposed to “lie” as I had once been told), a restaurant that serves a combination of dishes from China, Indonesia, Thailand and Vietnam, with a focus on the latter two. 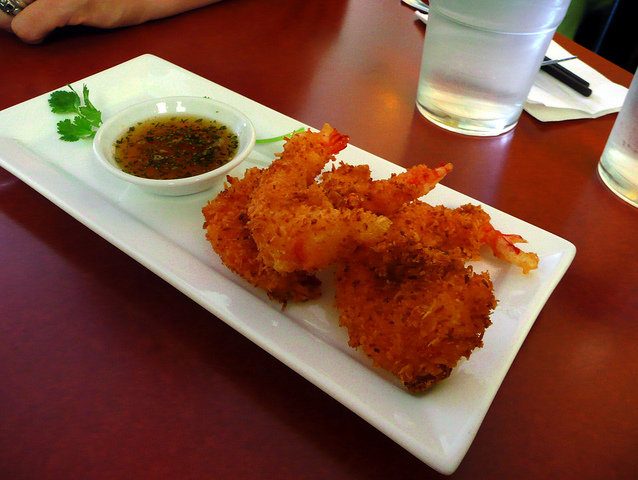 The restaurant is small but nicely decorated with lots of plants and walls freshly painted in a cheerful, earthy green colour adorned in black decals with an Asian flare.  We were served immediately and within minutes of our order being placed, were presented with a beautiful plate of Coconut Shrimp with Thai Dipping Sauce ($6.00).  The shrimp was big and juicy and the coconut tasted fresh.  I was impressed. 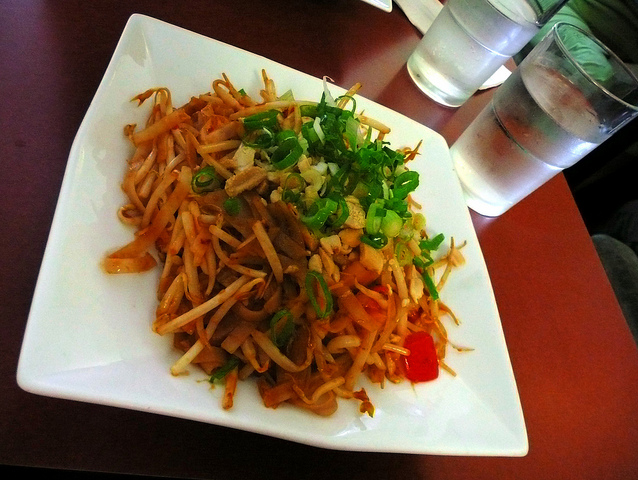 Both my dining partner and I ordered Vegetarian Pad Thai ($8.50) and, although it was well cooked and fresh, it was a little underwhelming.  I’ve had some fantastic pad thai in Kingston and this wasn’t it.  It was just a little boring with a few pieces of tofu and stir fried green and red peppers with a sprinkling of peanuts on top.  I would have liked more tofu, some egg ad definitely more sauce.  Lucky for me, my friend paid the bill but I was pretty amazed to see that it was over $40.  For two main courses and an app with water to drink, that seemed a little hefty.

A few days ago I decided to give Ly’s another go and to try to be a bit more adventurous with my order.  I decided to go with take out this time.  I placed my order over the phone and discovered that the online menu is out of date (and their website appears to be down right now too).  No worries, I was still able to order what I wanted.  My food was hot and waiting for me when I arrived to pick it up 15 minutes later.  I was once again surprised by the price.  For an app and a main, it came to $18.50.  Once I got it home, I started to feel better about the price, the food looked beautiful. 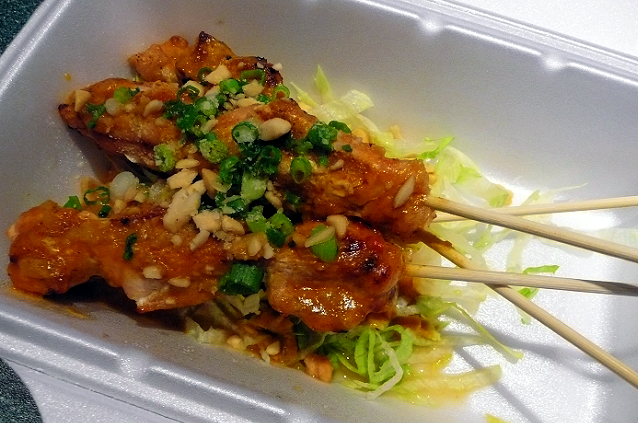 This is the Chicken Satay ($8.50).  You can also get it with beef or shrimp.  I’m used to satay coming with peanut sauce but this satay had already been covered in sauce when I opened the container.  I wouldn’t have minded my sauce on the side so I could control how much or how little I got.  The chicken was a bit tough and the sauce could use a bit more kick, whether that be heat or just a bit of tamari or soy sauce.  Overall, it wasn’t a bad app but a little expensive for what I got. 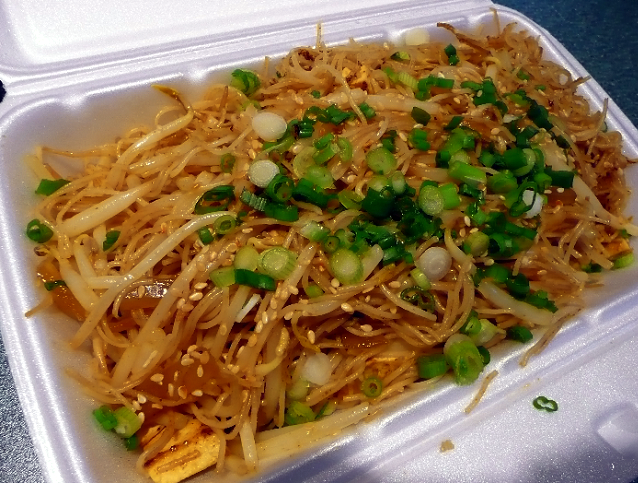 This is Vegetarian Singapore Noodles: stir fried vermicelli with tofu, sesame seeds, bean sprouts, onions and a hint of curry ($8.50).  The helping, as you can see, is enormous and it smelled delicious.  Usually I find stir fried vermicelli to be really sticky but these noodles were perfect.  I was thrilled to see that the tofu was grilled rather than fried.  It had a nice crunch but still retained its soft texture in the middle.  The flavour was pretty much what I expected, I used to get a dish like this at the Asian Market at Princess and University when I was a student.  This version was very similar in flavour but could have used a little kick once again.  The veggies seemed to have a sweetness to them that I would have liked more of throughout the rest of the dish.

Overall, I would say my experience at Ly’s has been alright.  When it comes to Asian cuisine in Kingston, the competition is stiff so it’s really important to go that extra mile with every dish.  I would say the biggest thing that needs improvement at Ly’s is the pricing.  I know I can get something of equal or greater value elsewhere for a good $5 less.  I’m not saying I wouldn’t go back, but it probably won’t be my first choice any time soon.  I do know that next time I’ll be sure to ask for more spice in my dishes though.

One thought on “Ly’s Place”