I went to Casa Domenico in November 2008 and there were just too many problems that I decided not to write about it, despite the fact that it is considered highly recommended on Chowhound. For starters, the server heard my order wrong and ordered me the wrong meat dish, then when I tried to clarify it, she told me that the one that I wanted was sold out. Finally, she brought out my second choice meat dish and, here is the grossest part, there was SOUP SKIN ON THE DEMIGLACE. SOUP SKIN. I dragged my fork through the sauce and it wrinkled with the pressure. Shudder.

The only reason why I’ve given Casa a second chance is because J and I won $50 dollar certificate there from winning her work curling tournament. Yes. We won it. Surprising no?

It really is quite nice inside. And the service is attentive. I love exposed brick.

We started with the Zuppa di Vongola (Clams, sausage, root vegetable chowder, smoked paprika and chives) for $10. The clams had a few grains of sand. I am never 100% sure of how much sand is acceptable in a clam. It wasn’t a huge deal and didn’t detract from the dish. The clams were fresh, the stock was rich, and the the sausage and vegetables were quite hearty. This was a nice start to our meal. 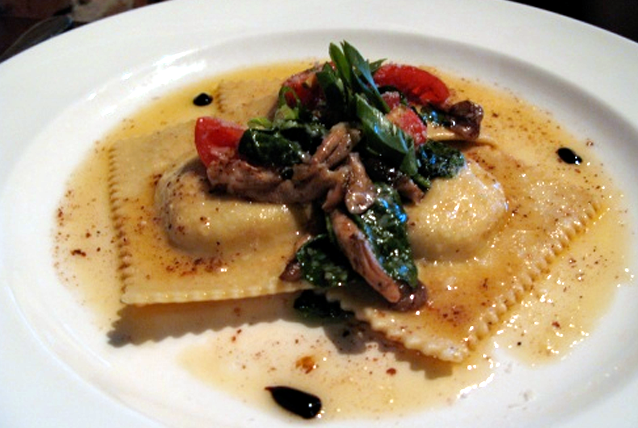 We also had the Ravioli alla Silvio (goat cheese and artichoke ravioli with brown butter, honey mushrooms, tomatoes, spinach and balsamic vinegar) for $14. The noodle was a touch too al dente. I also found the goat cheese a bit strong. An aside. I just asked J what was the best way to cut down the strength of goat cheese. I asked if it needed more acid. She said “You use less goat cheese.” I didn’t love this dish. 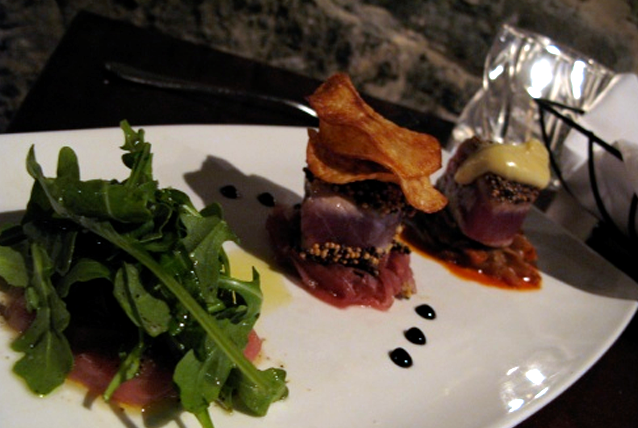 For my main, I had Tonno Terzetto (essentially tuna three ways: a) black peppered tuna (rare) with caramelized fennel, tomato oil and citrus aioli, b) mustard seed crusted tuna (rare) with marinated red onions and potato chips, c) tuna carpaccio with extra virgin olive oil, capers and arugula salad) for $29. I really enjoyed this dish. I ate it in the wrong order. I should’ve started with the Tuna carpaccio as it was really light and fresh. The mustard seed crusted tuna was really delicious and zesty. The crust added a nice texture without weighting down the fish. The black peppered tuna was a bit too heavy and peppery for my liking. Overall, you get a lot of fish with this dish and it is a lot of fun to eat. 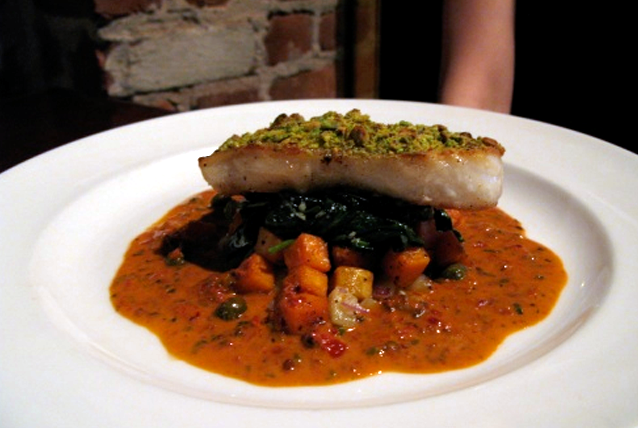 J had the Spigola (Pistachio crusted sea bass, sweet potatoes and caramelized apples, sautéed spinach with spicy lemon Calabrese sauce) for $33. I don’t love sea bass that much myself because I hate how fatty it tastes. But since watching Top Chef Season 5 and thinking of Fabio talk about Sea Bass, I have given it a second chance. I don’t love it still. But this was a good piece of sea bass according to Julia. The flavours were intense and married with the sea bass well. I detected an element of Chicken Wing hot sauce in the flavours. I may be mistaken but I certainly don’t think that Casa uses Frank’s Red Hot Sauce for their sea bass. A reasonable dish but expensive.

Overall, Casa has redeemed itself as a respectable restaurant. The food there isn’t cheap but you get a good meal. The tuna three ways was certainly the highlight of this meal. I’d probably go back just for that dish alone. How does it fare compared to the other “fine-dining” options in Kingston? I like Aqua Terra more. Also: their website is startlingly yellow.