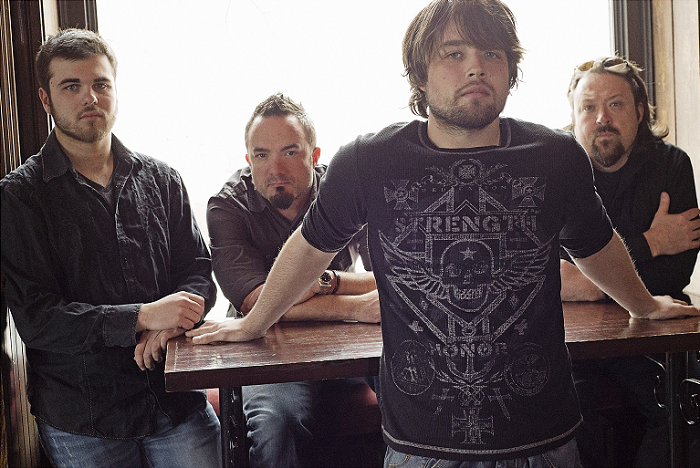 Kingston’s Suns of Static have been working hard since the release of their debut album, Begin Again in 2011.  While the line-up of the band has undergone some changes, it hasn’t stopped them from moving forward, writing new songs and recording a new album.  Suns of Static will release Rise this Saturday, May 24th 2014 at The Mansion.  They’ll be performing two shows, an early, all ages show at 7pm with The Stone Throws, followed by a 19+ show at 10pm with T3RR3STRiAL.  Tickets are $10 at the door or $8 in advance from band members.

1. Tell us a bit about yourselves and your musical backgrounds.

Brandon Taylor, vocals: I’ve been in numerous ensembles since the age of 14 ranging from concert bands and jazz bands, to choral music and barbershop quartets. I grew up listening to new metal like System Of A Down, Linkin Park and Slipknot. Later on into the ‘grunge’ era with Soundgarden, Pearl Jam, Nirvana.

Bil Cassidy, guitars, vocals: I’ve been playing drums since I was 5. I picked up a guitar (in dropped D tuning!) in high school. I’ve been in numerous groups over the years, mainly as a drummer. With Suns Of Static, I began to focus on guitar, songwriting, lyrics and recording. My influences on guitar are Eddie Van Halen, Jeff Martin (The Tea Party) and Jerry Cantrell (Alice In Chains). Musically and vocally, the bands that have influenced me are Alice In Chains, Jane’s Addiction, Pearl Jam, Soundgarden and Stone Temple Pilots. All-around though, there are so many bands, so many songs that all count towards what makes you write or play a certain way. So I’m pretty much all over the map. I think it’s important to note also that it isn’t just major bands that influence me. It’s been all the different people I’ve jammed with over the years.. I’ve learned a lot from each one.

Jordan Bulhoes, drums: I played my first drum kit when i was 6. I used to be in to pop music and stuff, top 40.. it was my dad that turned me on to rock music like ACDC, Guns and Roses etc. (thank goodness) I Played in lots of bands throughout the years. Then I did my own musical research and found myself listening to more progressive stuff like Rush and Dream Theater. Those bands in particular inspired me and helped to shape my drumming style. I also play guitar and bass.

Darrin McMillan, bass: My Dad taught me to play guitar at a very young age..around 5. I didn’t do too much with it until I was 11 when I joined my first band. Since then I’ve played everything from Guitar, banjo, drums and bass.. Everything from Grapes of Wrath to alternative Bluegrass to Post Grunge Rock leading up to Suns of Static. Bil and I have played in numerous bands together and have always had a subliminal level of conscience communication. It is a real treat to be involved with such talent. My early influences were Kiss, Led Zeppelin, Black Sabbath, Rheostatics, and Sound Garden to name a few.

John Callahan, guitar: I started playing guitar when I was 5 on an old classical guitar. My main influence when I was younger was the Beatles.. my mom was always playing The Beatles. I was also in orchestras and symphonic bands all through out high school as well as jazz band. Another band I listened to a lot was the Mahones (my uncle was a founding member).

2. Suns of Static has been a project in the making for many years. Members have come and gone and songs have developed along the way. Can you tell us a bit about the history of the band and how it has come to its current incarnation? How have the ups and downs and changes in membership affected the final versions of these songs?

BiL: After the first version of Suns Of Static (which was really the second version, hence the album title “Begin Again”) lost momentum, we all went our separate ways. I continued to write new material with Geoff Jarvis, until he moved away and it became tricky to find time to get together. So for awhile it was just me recording demos and ideas.

I joined another band called Fugitive Underground, playing drums. After a few shows we got Jordan Bulhoes to come in and play drums, and I moved to guitar. After a few more shows with FU, things started to quiet down as Ryan Gollogly (songwriter, singer) wanted to move on to another project called Goldwing. So around May 2013 Jordan and I started hanging out in my studio, just jammin’ and messin’ around with ideas. We took some of my demos and starting arranging and tightening things up. We kept our eyes and ears open for potential band-mates, especially a singer. Around October, Jordan discovered a local band called Statue In Ashes. Their singer, Brandon Taylor, had recently left the band. We got in touch with him. A few days later we met at lunch and went and jammed the same day. Darrin has been a friend of mine and a musical collaborator for almost 20 years. He was excited about the new tunes and jumped on board.

We all starting jamming the tunes, worked towards finishing up the arrangements of the songs. Lyrically, some of the songs were already completed years ago, while others were blank slates. Brandon and I worked together to finish off the rest of the lyrics. After we were satisfied that we had the tunes sorted out, we went into recording mode, starting with Jordan laying down drum tracks in my living room just after Christmas. Most of the drum tracks were done in one take. Main guitar parts were done next along with Darrin’s bass parts. Brandon did his vocal parts one song at a time over a few weeks time. The mixing phase was long and we burned through a stack of CDs taking the songs out to the car to check everything. We did so many tweaks and fixes that I was starting to go a little nuts. Thankfully, eventually we were happy with the final mixes.

With the CD sent off for production, we started to focus on playing the songs live. We asked a friend (and musical collaborator) of Jordan’s, John Callahan, to join us on guitar for our CD show to help fill in the sound. He picked up the parts effortlessly, and he was excited to be a part of everything. So he’s in the band now.

And so, we are a five-piece. Plans are underway for shows around Kingston as well as out of town.

3. Who are the influences of Suns of Static and how would you describe your music to someone who has never heard the band?

4. What kind of show can we expect at The Mansion on May 24th?

It will be energetic, loud rock music. We are doing two shows in one night. All ages at 7pm with The Stone Throws, then 19+ show at 10pm with Terrestrial.

5. While many musicians flock to larger centres, you have chosen to continue making music in Kingston. What keeps you here and what, in your opinion, makes the Kingston music scene unique and worth being a part of?

Kingston is where we live.. most of us have lived our whole lives here. This is really a fresh start with this lineup in terms of shows and gigs. So our next few gigs are close to home. We plan on making it to the larger cities as we get more shows under our belts. The Kingston music scene is very interesting and it’s such a small town everyone knows everyone and generally supports each other.

6. After the release of Rise, what’s next for Suns of Static?

Focusing on the live shows definitely. We aren’t planning a sweeping tour of Canada or anything like that. We have day jobs and that would be difficult to manage for most of us. We are hooking up with a few bands in other cities to do some weekend warrior kind of stuff. We are always looking for cool opportunities and unique gigs.

New song ideas are already forming every time we get together, but we’ll try to not get too distracted with new material. We are excited to play Rise for as many people as we can.