Kingstonist’s best of 2015 continues with an absolute gem from our dear friends at Queen’s Archives.  Longtime Kingstonians will undoubtedly remember Queen’s University’s unprecedented relocation of three houses from Union Street to make way for the construction of Stauffer Library.  The intricate evolution required months of planning and coordination, while the homes were successfully moved in less than two days.  The extraordinary journey attracted crowds of onlookers, as evidenced in the photo sourced from Queen’s Archives.  The event was so incredible, that our post received numerous challenges for verification and confirmation that it was not a carefully orchestrated, Photoshop hoax.  Still don’t believe us?  Check out the full recap detailed on CDS Building Movers’ website; the company who pulled off the move.  Big things really do happen in Kingston! 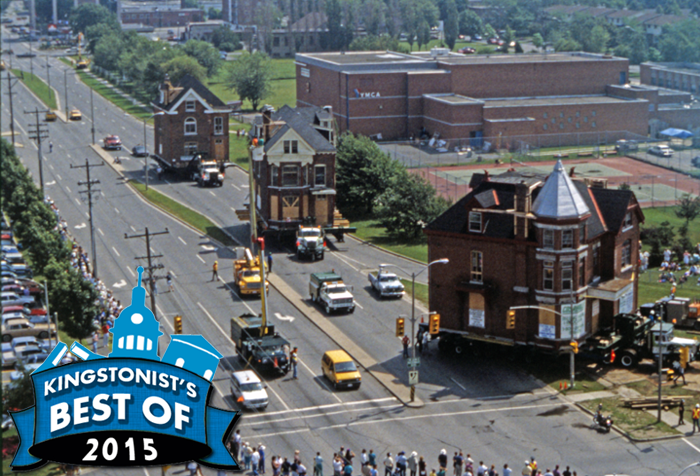 Usually from the archives we feature older photographs from another century but that is not entirely representative of all of the material we have here in our holdings. Much of the material we have is of a more contemporary vintage. This photograph is from August 9th, 1992 when the three historic homes that occupied space on the proposed land for Stauffer Library were relocated to the grounds of the Correctional Services of Canada College at the corner of Union and Sir John A. Macdonald Blvd (where they still reside today). The route was circuitous in order to avoid as many trees, power lines and narrow streets as possible. The photo above is at the corner of Bath and Sir. John A. The move took 16 hours over two days with crowds of onlookers along the way.