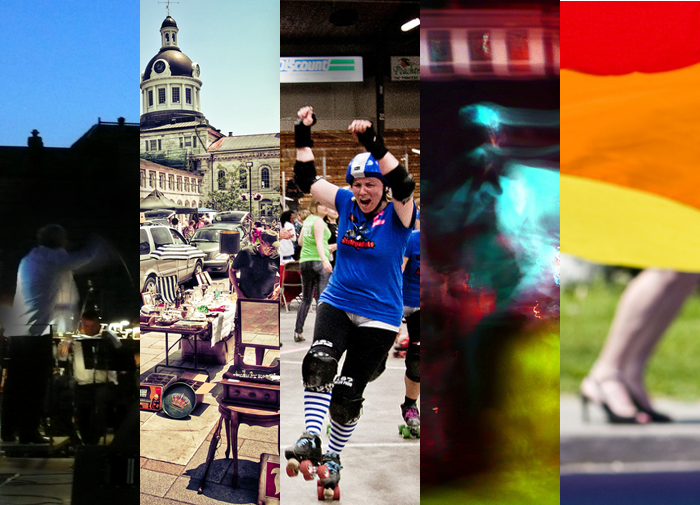 Looking outside, it’s hard to believe spring arrived well over two weeks ago.  The dirty snowpack and wretched ice are still hip deep in the darkest corners of our yards, while trusty furnaces continues to churn out glorious heat on those bone-chilling nights. With warmer temperatures slowly revealing what use to grass, and a few brave patios popping up here and there, it’s hard not to get excited about springtime in Kingston.  Dreams of sun-kissed patios, digging around in fertile earth and dipping a cautious toe in Lake Ontario are dancing through my head.  While the first day of summer can’t get here soon enough, today we’re pausing to reflect on the best of the best of what the Limestone City has to offer this spring. Challenging as it may be, we’ve lovingly handpicked the most accessible, affordable and anticipated events in Kingston from spring 2014.

Maestro Fast’s Farewell, 26 Apr 2014: after 23 successful years conducting the Kingston Symphony, Maestro Glen Fast is set to retire at the end of this coming season.  Throughout his illustrious career, Maestro Fast has been a dedicated champion of new Canadian music, delivering over 20 world premiers during his tenure as conductor.  His significant contributions to the local community and music scene shall be celebrated and on the minds of many during the Symphony’s season finale; a Broadway themed spectacular featuring vocalist David Rogers.

Public and Farmer’s Markets, May thru October 2014: voted by our readers as the most anticipated event in Kingston this spring, the markets at Market Square and the Memorial Centre serve as definitive focal points for supporters of local agriculture, antiques and talented buskers.  Tempting even the most discerning customer with everything from locally-sourced produce to meats and maple syrup, baked goods and even fresh flowers, our bustling markets are packed with luring goodies, energy and friendly people from all over the city.  Meet the farmers who lovingly grow our food, and support the local food movement with pride!

Homegrown Live, 10 May 2014: the Joe Chithalen Memorial Musical Instrument Lending Library (Joe’s M.I.L.L.) is unique gem when it comes to accessible community resources, thanks to the tireless efforts of energetic volunteers and supporters.  Celebrating its 6th anniversary, the Homegrown Live music festival exists to raise much needed funds and awareness for Joe’s M.I.L.L., as well as donations for the Partners in Mission Foodbank. With last year’s festival raising nearly $8,000 dollars for Joe’s M.I.L.L, and collected 300 canned donations for the foodbank, the positive impact of Homegrown is easy to recognize.  With 13 participating venues featuring dozens of talented performers, Kingstonist is once again a proud supporter of this tremendous celebration of local music and community spirit.

Kingston Derby Girls’ Season Opener, 10 May 2014: the bone-crunching return of our beloved Kingston Derby Girls to the Memorial Centre’s flat track has officially been announced.  Blocking, jamming and whipping their way towards their fourth season of action-packed and entertaining roller derby, we’re eagerly anticipating seeing how this year’s crop of fresh meat fares against the vivacious, fishnet-clad veterans.  With last year’s addition of local food trucks making the odd appearance outside of the M-Centre, and the always entertaining live half time shows, there’s way too many good things to say about a night best spent with the Derby Girls.  One bout and you’ll be an instant fan.

Kingston Pride, 2 to 16 June 2014: spring concludes in Kingston with two weeks of inclusive events geared towards celebrating and bringing together members of the LGBTTIQQ2SA (Lesbian, Gay, Bisexual, Transsexual, Transgender, Intersex, Queer, Questioning, 2 Spirited, Allies) community. Hallmarks of this huge festival include lively dance parties, art displays, workshops, picnics and of course, the increasingly popular Pride Parade, which makes it’s way down Princess Street and other parts of the downtown.

Images in the composition displayed above (from left to right) were provided by Kingstonist, Andrew Anderson, Koopman, Kingstonist and Christoph S. Ng.