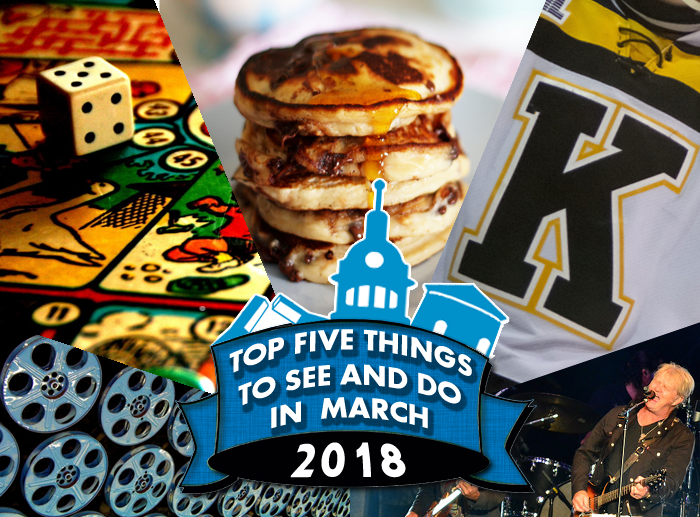 With Kingston gearing up for an entire week of above zero temperatures, it’s time to look forward to coming out of hibernation. Spring is in sight, and with gardens and even final exams on the minds of many, we’ve scoured the local event scene for the best events in Kingston in March 2018. Read on as we rhyme off our top five things to see and do in Kingston!

Kingston Canadian Film Festival, 1-4 March: since 2001, KCFF has featured over 500 films and 750 shorts, highlighting the best work from talented artists, award-winners and crowd pleasers ranging from David Cronenberg to Sarah Polley and Denis Villeneuve. This year’s KCFF reinforces the festival’s proud status as the single largest celebration of Canadian film throughout the world. With a lineup of films that will take you from Kingston to Kandahar, First Nations communities to Rosedale High, we can’t wait to be transported by unique storytelling from some of the best and brightest talents this country has to offer. Don’t forget about the shorts, free workshops and networking, industry guest appearances and talks, receptions, special events, music, awards and more!

King Con, 10-11 March: King Con is Kingston’s preeminent festival of comics, gaming, sci-fi, fantasy, and other expressive forms of fandom. Whether you geek out for cool demonstrations, tabletop gaming, interesting speakers, special children’s programming, cosplay, or other fantastic activities, King Con will have something for you! Presented by your Kingston Frontenac Public Library in partnership with Minotaur and Kingston Gaming Nexus, this year’s edition also features the “House of $laughter” by Improbable Escapes. Nerd out ’til your heart’s content!

Maple Madness, 10-18, 24-25 and 31 March: the arrival of warmer weather is accompanied by the enduring flow of delicious sugar maple sap, which is destined for collection and preparation at many local sugar shacks. At the Little Cataraqui Conservation Area, you can take in sessions teaching you how maple syrup was made in the olden days and how it is made now. Go for a wagon ride, eat some of the fluffiest pancakes you’ve ever tasted, and enjoy the beauty of Little Cat as it transforms awakens during Spring. Check out their website for the full schedule of events.

Kingston Frontenacs Playoffs, 21 March: what better way to mark the franchise’s 45th anniversary, than a successful playoff run? The Fronts faceoff in round one action against the Petes starting March 21st. And if their regular season record against their rivals from Peterborough are a sign of things to come, the lads in black and yellow should be able to make quick work of the Petes. Of course, they’ll get their faster with a packed house of fans making noise, so perhaps you’ll consider taking in a game or two. Check out the flex pack ticket option for great savings.

Tom Cochrane with Red Rider, 23 March: Big League players Tom Cochrane and Red Rider have been in the game for over 40 years banging out hits like Good Times, Boy Inside The Man, and Lunatic Fringe. The band, who Cochrane joined in 1978, have released 6 studio albums and sold over 6 million worldwide. Drawing inspiration from rock heavyweights Bruce Springsteen and Bob Seger, Tom Cochrane & Red Rider helped to define rock and roll in Canada. The band is currently on tour celebrating the 25th anniversary of Tom’s sophomore album Mad, Mad World, and this concert is nearly sold out. Don’t miss your chance to see him at The Grand.