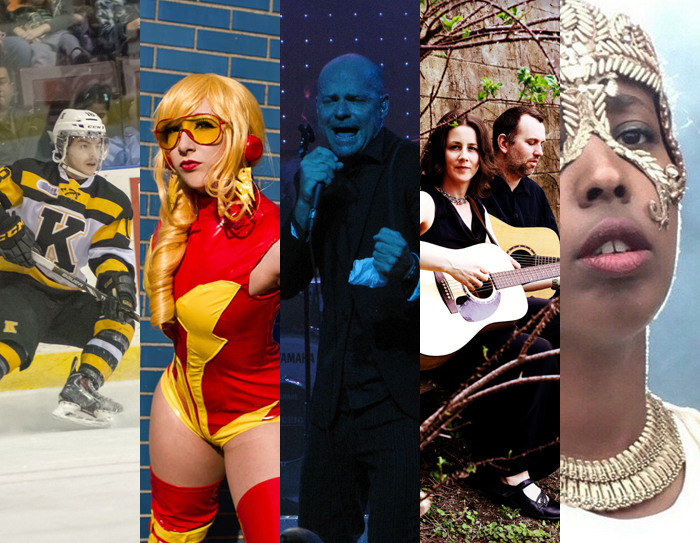 For our top five things to see and do in April 2015, Kingstonist is highlighting a trio of highly anticipated concerts, as well as opportunities to embrace your inner geek and root, root, root for the home team.  Enjoy!

Kingston Frontenacs Playoffs, various dates in April 2015 (and beyond?):  with the return of standout NHL prospect Sam Bennett to the club, the Kingston Frontenacs are hoping to go deep into the 2015 OHL Playoffs.  Their first round opponent, the North Bay Battalion, sure isn’t going to make things easy, which is why showing your support at home games played at the Roger’s K-Rock Centre is all the more important.  With every shift counting and contributing to the Front’s playoff fate, you can bet on this being truly exciting hockey.

Hero Fest, 11-12 April 2015: let’s face it, being nerdy is sort of cool nowadays.  Whether you consider yourself a boardgame nerd, comic book nerd, sci-fi nerd, or some specific variant therein, what you’re really saying is that you are cool… in a nerdy way.  Enter Kingston’s first ever Hero Fest.  It’s an opportunity for Cosplay, to mix and mingle with fellow nerds, and meet real life stars such as Denise Crosby (Star Trek – actor), Colin Baker (Dr. Who – actor), Daniel Logan (Star Wars – actor), Ty Templeton (Batman – artist) and more.

The Tragically Hip Concert, 14 April 2015: whenever The Tragically Hip return to their home town to perform a show, it tends to be a pretty big deal.  Their upcoming show at the Roger’s K-Rock Centre, as well as the subsequent tour, will commemorate the re-issue of the Hip’s third full-length album, Fully Completely.  This album was responsible for hits such as: Courage, Locked in the Trunk of a Car, At the Hundredth Meridian and Wheat Kings.  It’s no wonder why this concert was voted the most anticipated event in Kingston this month!

Kyra and Tully EP Release Party, 18 April 2015:  partners in life and music, Kyra and Tully, are releasing their highly anticipated third EP titled Journey Home.  The intimate show is a unique benefit in support of The Kingston Mosaic Group, and it will feature special performances by Matthew Barber, The Diaries and others.  Having had the opportunity to listen to Journey Home on a few occasions, I honestly cannot say enough good things about this soulful album and those who poured themselves into making it so great.

Cold Specks with Etiquette, 29 April 2015:  Cold Specks music is steeped in the musical traditions of the Deep South, while her sparse arrangements and chain gang rhythms are crafted to stop you dead in your tracks.  The Montreal-based songstress’s latest album, Neuroplasticity, has been described as “a record of the briefest flicker of consciousness counterbalanced against a roaring urge to return to the darkness.”  Regardless of how you describe it, I’m sure you’ll agree that this is one show you’d be sorry to miss.