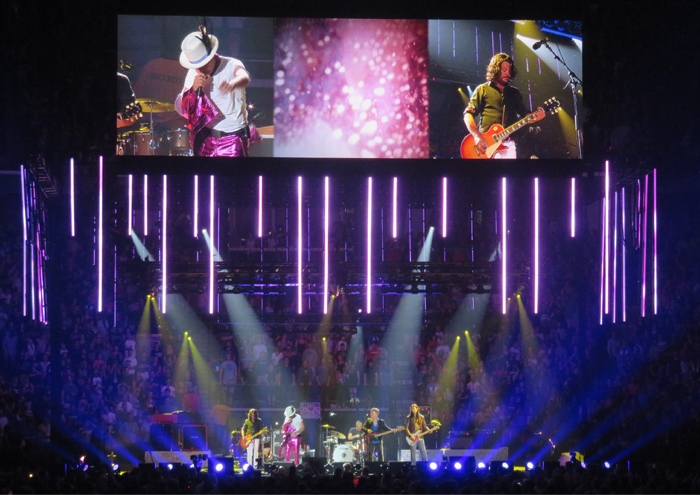 This past Saturday, the hearts and minds of the nation were on Kingston as The Tragically Hip took to the stage at the K-Rock Centre for what very well may have been Gord Downie’s final performance with the band. Since revealing that he had been diagnosed with terminal brain cancer, The Hip have been blowing the roofs off of stadiums on an epic, cross-country tour, which officially concluded where it all began for them back in the early 1980’s. With ten stops along the way, the bittersweet sentiment that Kingston’s iconic rock and roll sons have come full circle is entirely apropos.  That being said, thoughts about this being it for the band, may be entirely premature.

The final destination on the Man Machine Poem tour was billed as a national celebration, with the CBC’s live stream being re-broadcast in parks, public spaces and living rooms throughout Canada. With Kingston declaring August 20th Tragically Hip Day, the city wholly embraced fans and visitors from near and far who made the journey to witness the historic homecoming performance. With thousands of ticket holders descending upon the KRC for the concert, and well over 20,000 fans crammed into Market Square to collectively experience the live stream, it was an emotional send off few were prepared for.

The evening featured a set list that had been refined and teased throughout the preceding weeks of touring, which included the band’s most celebrated and recognizable hits. Fans inside and out got much more than they had bargained for during the two and a half hour concert, which feature three sweaty and tearful encores.  It was the epitome of a rock concert.  It could never be done again.  It will go down as one of those ‘where were you when’ moments.  Accordingly, this week’s poll asks:

What was your favourite part of The Tragically Hip's concert in Kingston?

When the band took to the stage for their third and final encore, Gord confessed that they were “officially into uncharted waters.” That sentiment might have been felt by The City of Kingston prior to the show.  There was no local precedent that they could refer to in order to prepare for The Tragically Hip’s final concert, which happened to include a visit from the Prime Minister and the thousands of fans who arrived to take part in the celebration. With road closures, free transportation, security check points, and an army of top notch security, first aid and volunteers, Kingston proved itself as a more than capable host.  Of course, Gord couldn’t have said it any better when he closed the concert by saying: “thank you for that.”

What are your best memories from the evening?  Where were you when the eyes of the nation were on Kingston and the Tragically Hip?