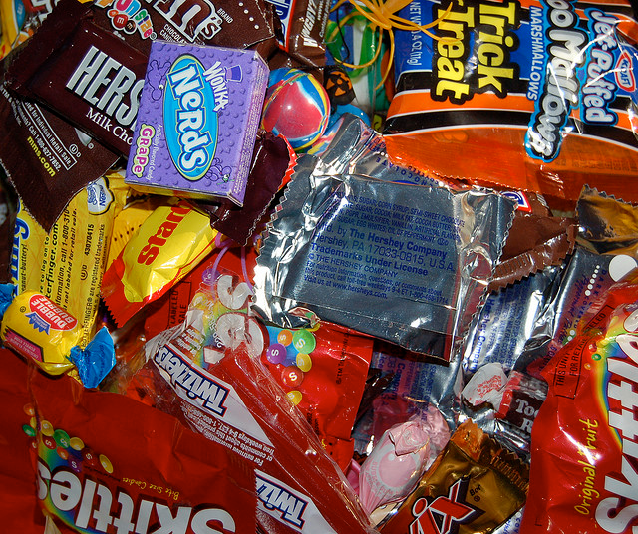 Well, here we are, the beginning of November and Halloween is a distant memory.  One thing that is not long gone, however, is the big bag of candy your kids collected on October 31st.  In our case, we don’t have children, but we did end up with a lot of leftovers since our trick or treater numbers were down this year.  So, what to do with all these extra goodies?  Our extras usually make their way to our respective places of employment where they get devoured in 10 minutes or less – problem solved.  There is a lot of talk amongst my parent friends though about how to handle the influx of sweets with their children.

Some parents control the candy in some form of a one-per-day, or only after dinner kind of method; others let their kids go crazy for one day only and then dump what’s left; and some don’t limit the eating of candy at all.  There are also those who play the one for you, two for me game…although usually under the cloak of darkness.

With the rise of obesity in children, and our general awareness of health being always in the headlines, many strategies have been tested and used over the last decade or so to limit the consumption of candy.  A new player on the scene since I was a kid is the Switch Witch, who, like the Tooth Fairy, comes in at night and swaps candy for other things like healthier options, money or toys.  Candy charity has become a popular option in many cities as well.  The Halloween Buy Back program in California collects candy that gets routed to care packages for US troops via Operation Gratitude, and many dental offices give kids $1 for every pound of candy they bring in.  One office in Calgary throws the candy out but then donates the equivalent weight in fresh apples to Edmonton’s food bank. (In 2010, the total weight collected was 725 kilograms!)

So this week’s poll question is for all the parents out there:

Maybe all the dangers of candy consumption are exaggerated and we should just stick to the old adage of letting kids be kids.  Dr. Michael Kramer, professor of pediatrics and epidemiology at McGill thinks Halloween is good for kids and that the dietary impacts of the holiday are a “pretty small drop in the bucket”, with regular day-to-day diet and long-term health being of far more importance.  “It’s good to be vigilant over most of the year, and then give kids a break at Halloween.”

So, good luck with the candy quandary.  There aren’t any perfect answers and as with most things, everything in moderation is a pretty good strategy to take.  That, and an investment in a good toothbrush.

Thanks to Andre Chinn for today’s pic.