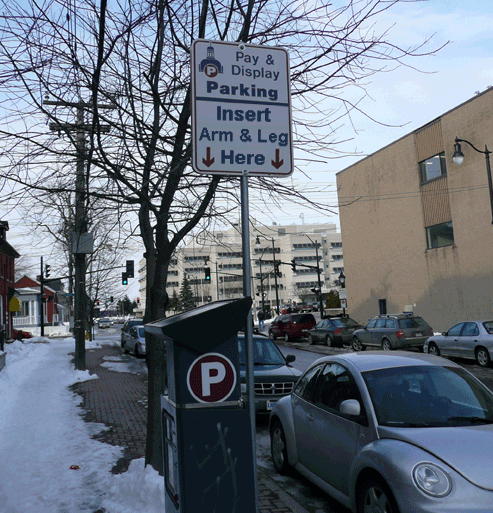 We’ve all heard the chorus of protests from groups such as KCAL and local business owners, who opposed the downtown location of the KRock Centre, based on the fact that there were no new parking areas to accommodate the random influx of event goers. So City Hall got creative, and now Kingston reigns supreme atop Google for keywords “dispersed parking.” The term refers to city’s use of pre-existing parking lots, whereby the further away from the KRock Centre one is willing to park, the less they are charged. It seems like a reasonable strategy, but let’s consider the fact that there were few empty parking spaces before the facility opened. Less than a month after the the downtown parking situation was tested by the few events held at the Krock, the City is addressing the problem with increased parking fees.

As mentioned, downtown parking has been a problem for years, and it’s not as though Kingston is a special case when it comes to absorbent fee structures, or the dispersed parking model. Such measures are typical in other larger cities, as they encourage people to take public transportation, which is another disappointing issue plaguing Kingstonians. What boggles my mind, is how the City can ignore calls to increase the downtown parking capacity by tearing down the unused Police Station, and instead selling it so that someone can build an unneeded hotel. Further to my dismay, is the possibility of losing my precious Food Basics, which could be transformed into an underground parking garage. At least we’d get additional parking out of the deal, but at an estimated $50,000 per space? Are our streets paved with gold or what?

Back to the issue of the future downtown parking system, which City Hall is likely to incorporate the following measures:

Essentially they are expanding the geographic area of metered parking, lengthening the overall range of hours they can charge people to park and, most importantly, increasing the rates. In the end, the City hopes that it will make more people consider using public transportation, while the remainder will add much needed coin to the City’s coffers. This does little for those of us who come downtown and circle the block umpteen times to find a spot just to attend to a few errands. Furthermore, it has the potential to delay the mass exodus of those determined souls who wait until the attendant leaves, just so they don’t have to pay for using City owned lots. So rather than generating more funds, this move could ultimately result in a loss of revenue and fewer people using the downtown for their shopping needs. Moreover, in the end we still have a parking problem on game night, or any night of the week for that matter. If only we could ride our bikes year round.