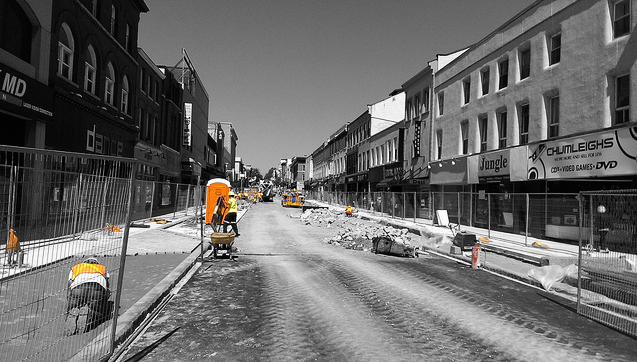 There’s an old saying in Ontario which jokes that the province that’s yours to discover really only has two seasons: winter and construction season. Large-scale construction projects have impacted Kingston in a big way this Summer, while our collective patience and navigation skills have been increasingly tested thanks to the shear number of road closures and detours in the Limestone City. Some days it seems as though you can’t make a left turn in Kingston without being met by workers in florescent orange vests, piles of rubble and the sweet smell of fresh asphalt.

Phase two of the Princess Street sewer upgrade, the widening of John Counter Boulevard as well as corrective resurfacing of Bath Road are all necessary evils that aim to improve transit conditions and essential infrastructure in Kingston. Thankfully, these three major projects have largely concluded, and the initial results prove that the inconvenience to commuters was worth it.  Nevertheless, with ongoing  repairs and upgrades focused on John A. Macdonald Boulevard, Bayridge Drive and Brock Street, Kingstonians still have to endure a few more months of detours before things get back to normal.  Accordingly, this week’s poll asks:

Looking back on the Phase Two of the Princess Street sewer upgrade which concluded just in time for Canada Day, I can’t help but comment on the project’s success.  The scope of the work completed was immense, and its completion in such a short amount of time, without any delays, is truly remarkable.  While it was an undeniable pain for commuters looking to cross Princess Street at select intersections, those of us traveling by foot were equally challenged by what seemed like miles of modular maze-like fencing.  One thing that stands out for me from Phase Two of the Big Dig was the friendly construction workers who were specifically tasked to direct people looking to make their way through the mess.  On more than one occasion I recall seeing these workers escorting folks through the maze, helping them safely arrive at their intended destination.  Say what you will about the inconvenience and cost associated with upgrading lower Princess Street, but the manner in which this project was executed serves as a shining example for subsequent phases of the Big Dig, and other road work in the downtown core.

I wish I could say the same about enduring the installation of speed humps on Brock Street.  While I appreciate their intended purpose, I refuse to subject my car to the resulting conditions (ie Rideau Street) that seem like an off-road, roller coaster experience.  With the Mayor vowing to keep on eye on things and seriously consider their removal, I can’t help but wonder why bother in the first place?  If speed is an issue, why not increase the police presence and frequency of ticketing?  But I digress…  What project has inconvenienced and incensed you the most this Summer?

2 thoughts on “This Summer’s Worst Road Closure in Kingston”