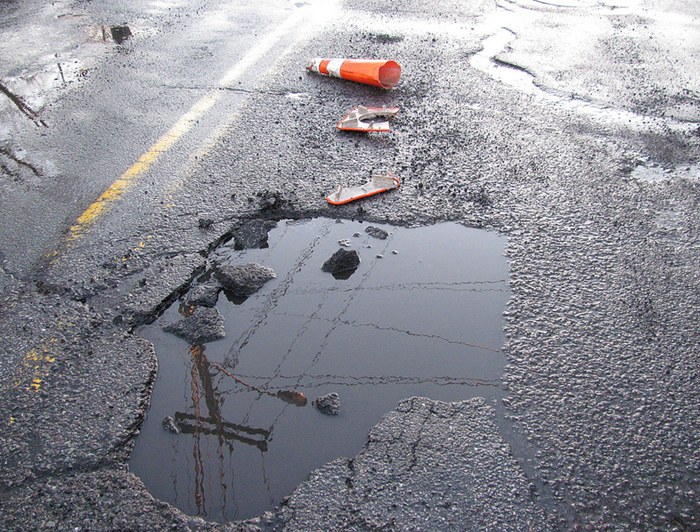 While winter is nearing its bitter end, the spring thaw has revealed shear treachery on every inch of Kingston’s roads. Over the past few weeks, road conditions have worsened with potholes deepening, leaving drivers with broken suspensions and shattered nerves. The worst streets resemble unwanted obstacle courses, which challenge those behind the wheel to zigzag all over their lanes and go painfully slow.  It’s not a matter of avoiding all of the potholes, rather, it’s about choosing which ones you might be able to endure without crippling your ride.  The situation is borderline comical, with local radio and tv stations challenging listeners to identify the city’s most spectacular asphalt blemish.  A slightly less hilarious fact about Kingston’s pothole situation is the associated repair bill, which the Major estimated as costing a cool $1 million.  And just to be sure, the city’s standard timeline for making our streets less treacherous:

…ranges between 4 days and 30 days, depending on the size of the pothole and whether it is on a paved or an unpaved road. The City’s obligation to fix a pothole is triggered only after the municipality becomes aware of the problem.

How bad are the potholes in Kingston?

Although we’re currently suffering the consequences of the spring thaw, our city’s streets may be better off than other municipalities, thanks in part to a decision 5 years ago to adopt strict guidelines pertaining to the quality and ingredients of asphalt used to patch potholes.  Developed by Simon Hesp, a Queen’s University professor, the new strategy aims to reduce so-called garbage ingredients such as engine oil, a commonly used in additive in asphalt. Accordingly to Hesp, such additives will cause the asphalt to fail and crack in the first winter and worsen to to the point of it being nothing but rubble after 10 years.  Hesp’s new approach to asphalt is being used at 33 test sites across Ontario, and although it’s not without its sceptics, we can only hope it proves successful and catches on elsewhere.

Which city streets are the worst in Kingston at the moment?  Have you contacted the City of Kingston to let them know which spots are in need of some asphalt TLC?  And what about the impact of potholes on bikelanes?  Drop off your additive-free comments below.

Special thanks to Mark Sardella for today’s photo.