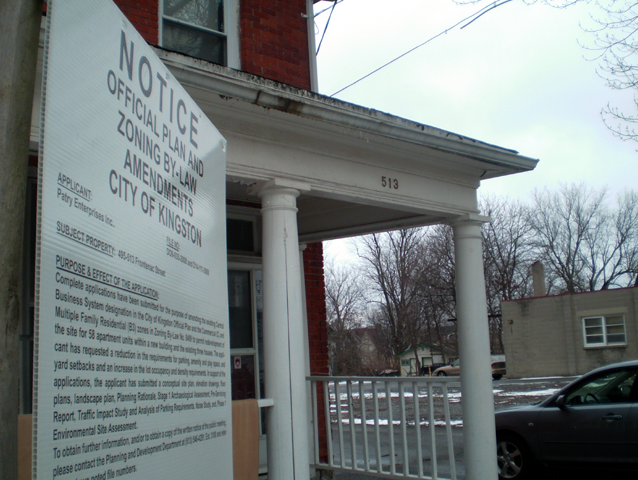 The democratic landscape in Kingston has changed in the last decade, and more so than amalgamation and various councils coming in and out of office. One of the biggest changes has been the rise of the neighbourhood association, advocacy groups that work on behalf of the community to make Kingston a better place, one block at a time.

One block of Frontenac Street was what created a neighbourhood association in Williamsville. One development on one block led to one big planning battle that ended this week with the city and the neighbourhood coming out on top.

After about five months of waiting, the residents of Williamsville got the answer they wanted from the Ontario Municipal Board. A proposed development on Frontenac Street, just north of Princess Street, won’t go ahead as-is. The development would have merged seven properties in order to build a four-and-a-half storey, 58-unit complex made up of two- to five-bedroom apartment units. The plan was to rent the units to upper-year university students and young professionals. The city’s planning department reviewed the application and decided that it did “not represent good land use planning as it (was) not compatible with the surrounding neighbourhood.”

The board dismissed the appeal from developer Patry Enterprises Inc. and ruled that while “certain elements of the proposal (are) desirable and appropriate,” the development was “not reasonable, not appropriate, and (did) not represent the principles of good community planning.” In ruling against the developer, the OMB upheld the city’s decision to reject the planned development and the neighbourhood’s wish to see development on the site that would fit the feel of the community. (You can read the full ruling here.)

That sound you hear from the residents around the Memorial Centre is a sigh of relief. They waited a long time to hear their fate and many couldn’t be happier with the result.

“The community does have a voice through the established process. By working together on the basis of common interest and through consensus we can achieve our goals,” says Sue Bazely, one of the founders of the Williamsville neighbourhood association. “In this case, it was all about ensuring fair treatment within the allowable parameters of the planning process.”

Those neighbourhood associations — and you know who you are — have become an important part of the democratic landscape in Kingston. Don’t believe me? Just ask the residents in Williamsville.

4 thoughts on “A Win For Williamsville”