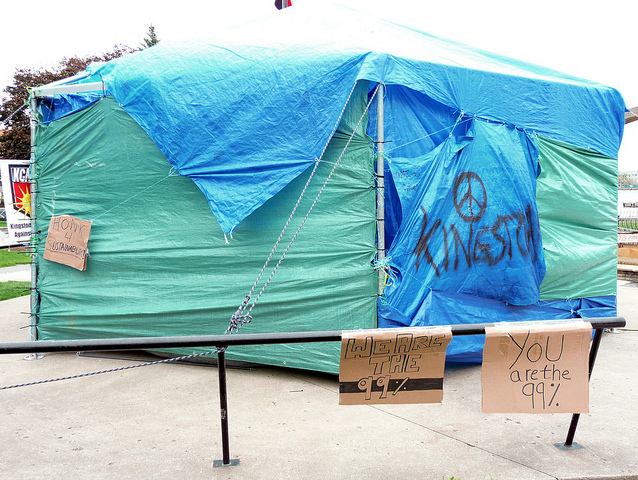 Over the past week, occupy movements in cities across Canada and the US have been dealt countless eviction notices, which have been met with both support and opposition. Arguments to allow the demonstrators to remain in place are empowered by our right to peacefully protest as well as freedom of speech, however justification becomes clouded when considering these rights against those of private property owners whose land is being occupied.  The local movement, which is stationed on public property across the street from City Hall, is limited to a tarp-enclosed structure, but it is nevertheless active and in tact.  Since the early days of the peaceful Occupy Kingston protest, the number of signs on the exterior of the encampment has swelled from what is pictured above to a sea of cardboard that presents humorous and serious slogans that target the likes of Wal-Mart.  With the local occupy chapter vowing to remain in place over the cold winter months and beyond, this week’s poll asks:

Should Occupy Kingston be evicted from Confederation Park?

The City of Kingston and City Police have stated that they will not yet take action against the Occupy Kingston movement, as the demonstration remains free of health and safety violations as well as other law enforcement issues. This is a positive sign, and certainly much of the credit lies with the local demonstrators who have implemented a Good Neighbour Policy, which sets the following ground rules for participants:

What are your thoughts on the occupy movement here Kingston? Are you satisfied to let the protest continue so long as it remains peaceful and safe, or are you concerned that the temporary encampment will become a blight on our historic Confederation Park?  Should the City of Kingston maintain the status quo, or begin to negotiate an appropriate time and date for the movement’s relocation or termination?