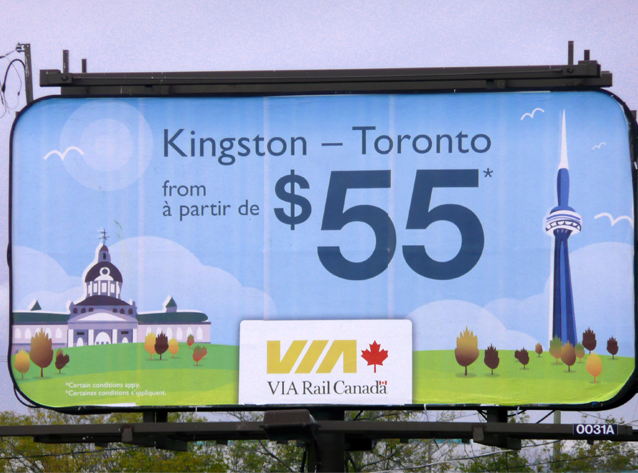 The current economic climate has has made day trips, and stay-cations increasingly popular options for tourists. Most Kingstonians are now, more than ever, trying to save a buck. With local attractions including Fort Henry, museums focusing on everything from penitentiaries to the Great Lakes, as well as the nearby Wolfe Island Wind Turbines, the Limestone City is becoming a year-round magnet for day tripping tourists from as far away as Montréal and Toronto.

Conversely, both the Big Smoke and Montréal are highly attractive destinations for Kingston-based tourists who are looking for nearby getaways, and big city festivals.  This idea is behind of the latest VIA Rail advertising campaign that’s showcased on billboards throughout Kingston.  Each billboard illustrates a major landmark from both the originating and destination cities. While Toronto’s skyline is proudly characterized by the CN Tower, the Olympic Stadium reigns supreme as Montréal’s most recognizable landmark.  Kingston on the other hand, is represented by our historic, and photogenic, City Hall.  As you can see, all of the scenic illustrations come complete with autumn flavoured trees, blue skies and song birds.  What more could you ask for on your perfect day-trip?

I believe I’ve mentioned my love of travelling by train in the past, so it should come as no surprise that I like this series of ads.  Further, I am happy that the marketing team hired by VIA Rail didn’t choose to represent Kingston with Fort Henry, or the K-Rock Centre.  The Limestone City is a place with a rich history, and it makes better sense to play this up by featuring our most recognizable landmark.  And honestly, we can’t really compete in the modern structure department, as Toronto is home to the former world’s tallest building, while the bulky Olympic Stadium nearly bankrupted Montréal.  That’s all to say, having the LVEC represent Kingston would be laughable to Torontorians and Montréalers alike. Heck, I am sure a lot of Kingstonians would shudder.

In closing, travelling by train isn’t for everyone, especially those on a considerably tight budget.  In that regard, it’s worth pointing out that the asterisks on the bottom left hand side the above billboard indicate that the advertised $55 rate is only for a one-way ticket.  So in other words, you still have to cough up the cash to get back home, or get real cozy in your new surroundings.