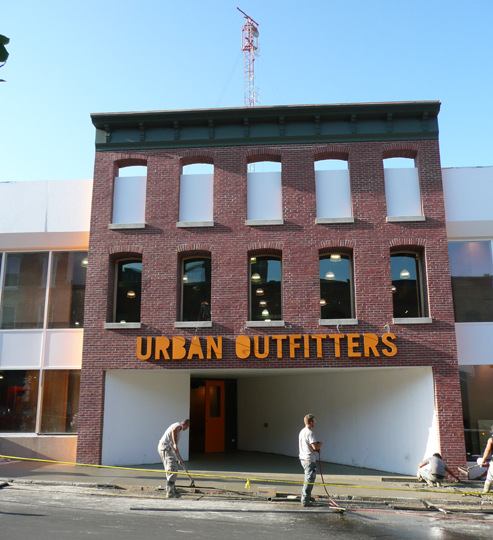 Back in February ’08, I wrote about Urban Outfitters who had just announced that they would be taking up residence in the old Royal Bank location just up from Montreal Street on Princess. Throughout the summer, the building has undergone a spiffy makeover as there’s been a flurry of activity both inside and out. The hard work has clearly paid off, as the scaffolding was peeled off last week to reveal a clean storefront that perfectly blends the old with the new. Considering the uber-cool reputation of the Urban Outfitters brand, it’s a pleasant surprise that so much consideration was given to harmonize the façade and deviate away from some corporate cookie cutter design.

I’m not entirely certain how one would classify the building style in Kingston’s downtown business core, but words like potpourri and mélange come to mind. A majority of the buildings are low-rise, 2-3 story brick, with a spattering of newer buildings plopped here and there. Neighboring the Urban Outtfitters store is the recently renovated Grand Theatre which is the crown jewel in a block that is predominantly brick and mortar. On the opposing side of the street, Urban Trade occupies a 3-story brick building, while the rest is a hodgepodge of brick, cement and glass. So what’s the solution to blending in with surroundings that are anything but homogeneous?

Rather than make the entire front the same, a faux front was created for Urban Outfitters with red brick that stretches slightly above the actual roof line. This gives the false impression that the building was once a 3 story apartment-style residence, and I kind of enjoy the false windows they’ve placed near the top. As for the rest of the building, they’ve covered the grey stone and painted it the same light colour as the metal frame. I’m still not sure if this element is entirely finished, but the results thus far are pretty outstanding. Then there’s the huge windows, which offer expansive views of the activity inside, and what an inside it’s turning out to be.

Looking indoors, huge slabs of wood have been hung on the walls to serve as display boards for everything from apparel to dorm room knick knacks. At the rear of the store, more wood grain can be seen in the form of a gigantic staircase, which (if they’re following the layout of stores in Montreal and Toronto) will lead to the second floor clothing department. All aglow in very trendy and industrial fixtures as well as a simple concrete floor, overall it has the authentic warehouse feel Urban Outfitters’ stores are known for.

Yes, I am getting excited for the grand opening of Urban Outfitters Kingston, which should be by mid-August. Although still weary of whether or not there will be a negative impact on smaller knick-knack and clothing merchants, I’m keeping my fingers crossed that this development will do more good than evil.