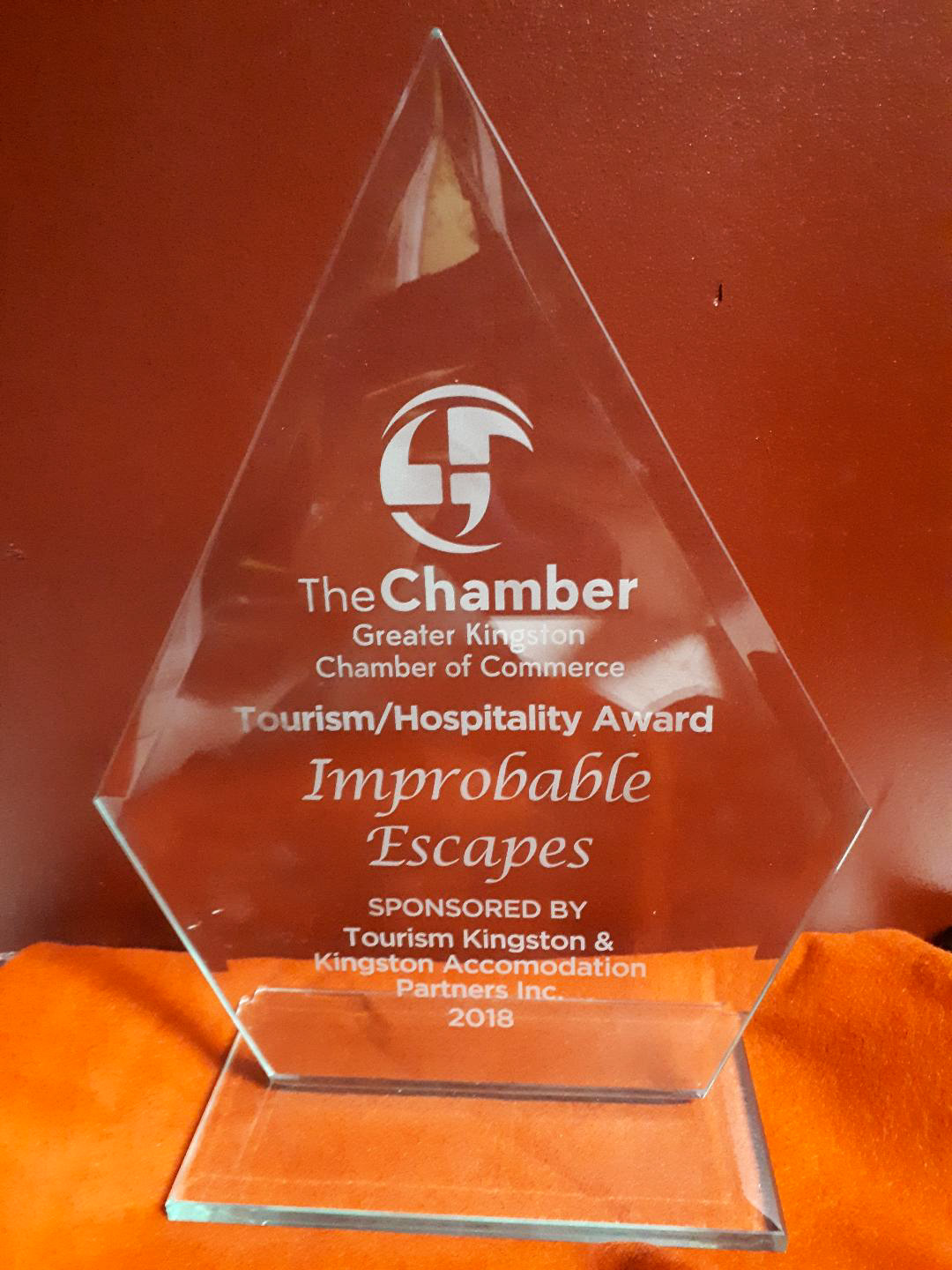 On the evening of Thursday, Nov. 8, 2018, local escape room business, Improbably Escapes, was up for the Tourism and Hospitality Award from the Greater Kingston Chamber of Commerce.

Halfway around the world, Melissa Eapen and Emma Rochon, founders of Improbable Escapes, were sleeping, as they were currently in Italy on a tour of Europe where they are taking in different regional tourism programs, as well as different escape room concepts on a different continent.

Here in Kingston, Adam and Devon Ellis, the sibling team that makes up part Improbable Escapes’ game development department, were sitting at a table in The Four Points by Sheraton during the Chamber of Commerce Business Achievement Awards Gala. As one of four businesses nominated for the Tourism and Hospitality Award, those with Improbable Escapes weren’t really expecting to win – after all, they were up against three of Kingston’s most well-known and celebrated tourism organizations and destinations: CORK, The Screening Room, and Historic Inns Kingston.

“The rest of the businesses that were nominated are pretty strong pillars of the Kingston tourism community, so it was an honour to be nominated, and I think that’s why it came as a bit of a surprise, just because businesses that were also in the category, they have a lot of positive clout, they’re all really well known,” said Eapen on the phone from Italy where she stood beside her partner, Rochon, to discuss their win. Eapen said she and Rochon were absolutely thrilled to wake up to the news they’d won, and the numerous messages and emails of congratulations they’d received since the win.

“Especially as kind of the newbie on the block, as well, it was surprising to win the tourism award… It kind of came a bit unexpected, but we’re really excited about it,” she said.

Eapen and Rochon opened Improbable Escapes in 2015 after scouting across the province to find the ideal location to open up a business focused on escape rooms. The pair knew just how popular escape room games were becoming all around the world, not only for tourists looking to experience and learn about locations in a fun and engaging way, but also for businesses, teams, and co-workers looking to do some bonding and team building.

Within a year, Improbable Escapes had formed their first tourism partnership when they worked with Fort Henry National Historic Site to create a game for Fort Fright. Since then, it’s been nearly impossible – or, perhaps, improbable – for those in Kingston not to be familiar with the name ‘Improbable Escapes.’ In their three short years in business, the company has moved to a bigger location, expanding from hosting one in-house game to what will soon be five, and partnered with a number of local organizations and agencies to create unique, entertaining, and exciting experiences here in Kingston for locals and tourists alike. From hosting games in Murney Tower and Bellevue House, to creating a game inside a Kingston Transit bus as part of Princess Street Promenade, Improbable Escapes has, itself, become a celebrated part of the Kingston community and experience.

So what are the two founders doing in Europe? Well, apart from experiencing another part of the world, the pair are learning about different tourism initiatives and escape rooms ahead of a conference they’ll be speaking at in Amsterdam this coming May.

“It’s called Up the Game, and we’ll be talking about different historic experiences and creating real and accurate historic games,” said Eapen, who obviously knows a thing or two about incorporating local history into escape games here in Canada’s first capital.

“We’ve got some new things planned for when we return, too, so it’s all just really exciting.”

Still, Eapen and Rochon are quick to point out that their quick success here in Kingston wouldn’t have happened without the support they’ve received from their fans and the community.

“We have so much gratitude for the people who have supported us to this point. I think a lot of people took a chance on, at the time, two really young women who didn’t really know what they were doing, but we had a really community rally behind us and support us and like what we were doing, so we were able to get involved with a lot of different tourism organizations, a lot of different municipality organizations,” Eapen said, her excitement evident in her voice, even over the phone from thousands of miles away.

“We’re really glad and happy about the games that we’ve been able to put on in Kingston so far, and we’re looking forward to creating more experiences we can bring to our city.”