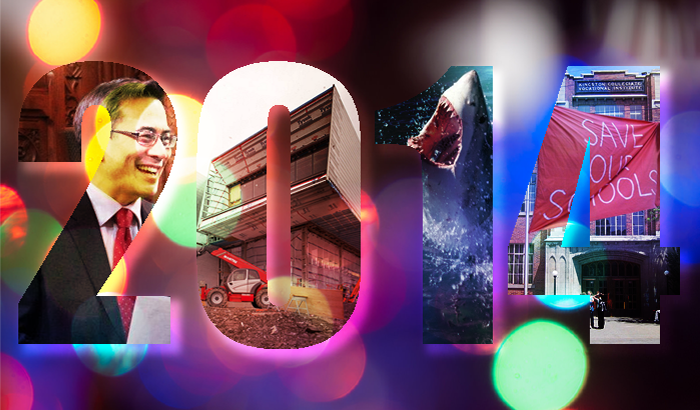 Well, here we are, just over two weeks away from a new year. That means it’s time to take a look back at the headlines that made 2014 memorable in YGK. We began the year with one of the most brutal winters Kingston has seen in a long time. Thankfully spring did eventually show its face and brought with it ongoing discussion and controversy surrounding the development of bike lanes in Williamsville and how the removal of parking spaces would affect local businesses. Spring also brought with it the approval by City Council of 10 red light cameras. In June, Ontario elected new representatives bringing in Kingston and the Islands MPP Sophie Kiwala. We also saw the re-opening of Artillery Park, a new Musical Director for The Kingston Symphony, a new mayor and our first online election, and charges laid against the two companies responsible for last December’s Princess Street fire. In less than happy news, a community is dealing with vandalism at a local Islamic Centre and our military base has cracked down on security after the too-close-to-home tragic shooting in Ottawa. On a brighter note, and looking to the future, Queen’s has approved the plans for the new Richardson Stadium, Kingston developer Henk Doornekamp has proposed moving the old Montreal Street train station, and two new arts festivals, QPop! Music Festival and On The Wall Street Art Festival made their debut. Looking back at all the events that made headlines in 2014, our final poll of the year asks:

What a year it was.  There is a lot to reflect on looking back at this year but 2014 also brought with it many things to look forward to.  New festivals, arts venues, political representatives and development projects all point to wonderful possibilities.

So tell us, what headlines do you remember most from 2014?  Drop off your comments and wishes for 2015 below.