According to the most recent results from our last poll of 2010, Kingstonist’s readers place Gerretsen’s ascent to the municipal thrown the second most significant headline of the year.  That’s debatable, however in order for young Gerretsen’s win to occur, Harvey Rosen had to step aside.  In that respect, Jordan Press aptly captured the moment at City Hall where former Mayor Rosen formally announced that he would not seek re-election. 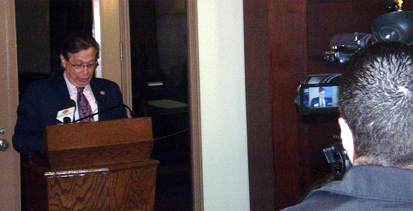 The flag of the city hung to his right and the exit sign just above it.

With the backdrop of a darkened council chamber, Mayor Harvey Rosen announced he would not look for a third term in office.

“What I am about to announce is what I see as a need for a change for the city and for me in personal terms. After seven years at the helm, I believe it would be good for the city to have new leadership to work with the council that will be elected in October. … In politics, a wise person knows when to seek an office and when to step aside,” he said.

A few minutes later, he ended his 10-minute speech and shook hands with some of the staff, supporters, current and former council members who showed up for the announcement.

The speech spelled out the highlight of what could be called his accomplishments — or failures, depending on what side of Kingston’s political spectrum you sit on.

Rosen talked about the “bricks and mortar” council during his first three years in office — his comment: “I leave it to posterity to make this decision, but my personal belief is that this council was one of the finest ever to serve this city” — and the big-ticket projects that ignited community debate and instilled long-lasting feelings for those on both sides of the issue. Taken another way, the speech was another chance for Rosen to defend the projects that caused the most controversy during his first term; he took the same opportunity during his inaugural address to the council he leads now.

Whether he really led this council is up for debate. Rosen has not had the support he had during his first term. He has publicly and privately vented about this council, one that he said in his speech was more focused on “softer pursuits” focused on sustainability policies. He didn’t explicitly vent frustration on this day, but what was not said was just as important as what was said.

The timing of the speech was one that Rosen had thought about for weeks. By making the announcement Thursday morning, mayoralty hopefuls can now unofficially begin the public race to replace Rosen. Soon, those who are serious about taking on the job will nominate themselves to legally begin fundraising. And some of them were in the hall listening to Rosen’s words.

Councillor Dorothy Hector mingled in the crowd. She has had her eye on the mayor’s chair for some time.

Councillor Vicki Schmolka stood in front of the mayor’s office, giving an interview to one of the reporter’s in attendance. While many expect her to run, she may not. 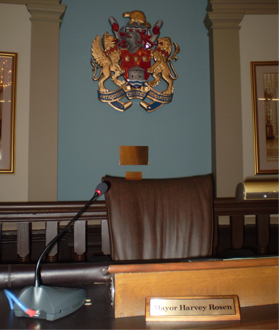 Who else might test the waters for the city’s top political job? Whatever the final candidates list is, Rosen might only be a behind-the-scenes actor in the election.

“I’d rather try to be as neutral and non-partisan as possible,” Rosen said about how involved he would be in the election. “But [candidates] may want to keep their distance from me.” Although he said this last bit with a laugh, he’s partially right: His public backing may be the kiss of death to a candidate, or that sentiment may already be sealed for incumbents who supported Rosen’s mandate over the last seven years.

Rosen swept to office seven years ago. He was returned by the slimmest of margins four years ago. The voters will not get a chance to ouster him the same way they voted out his two predecessors. Instead, they will get a chance to vote for a new direction for Kingston.