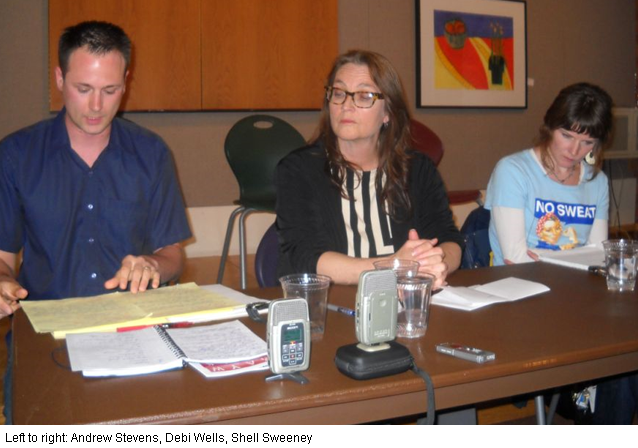 In spite of national peculiarities the labor movement has overleaped national boundaries.  Economic conditions are swiftly becoming the same the world over…As trade becomes international and the market a world market, the labor leaders in the several countries tend to draw together to exchange ideas, work out programs for common action, and protect the workers of each country against the competition of other countries.

Mary Beard, A Short History of the American Labor Movement (1921)

The Mayworks Festival of Labour and the Arts, a weeklong event designed to encourage social change by bridging the gap between artists and workers, hit Kingston last week. In addition to the Mayday Festival in Skeleton Park, tours of the working class Swamp Ward, screenings of labour-oriented films such as coalmining epic Matewan, and art exhibitions at the Artel and Modern Fuel, the celebration also featured lectures on issues like sexual harassment in the workplace and the social stigma faced by sex workers.

Of these lectures, perhaps the most pertinent to the broader future of the labour movement was last Tuesday’s discussion panel on “The Relevance of Labour Unions Today” at the downtown public library.  Upstairs in the Wilson Room, an audience of around 20 people gathered to hear a trio of speakers talk about the role of unions locally and internationally.  If there were broad themes to be found, they were the importance of organizing, tying labour to local communities through social justice, and creating an international movement of workers to combat the influence of transnational capital.

Each of the speakers was either active in the labour movement or had researched it extensively.  The panel included Debi Wells, president of the Kingston and District Labour Council; Shell Sweeney, regional organizer for the Public Service Alliance of Canada; and Andrew Stevens, a PhD candidate in sociology at Queen’s University.

Wells spoke first.  Besides her work with the KDLC, which represents 40 local unions in the Kingston region with a membership of over 10,000 workers, Wells is first vice president of elementary teachers at the Limestone District School Board and sits on the Board of Directors as treasurer for the Kingston Economic Development Corporation.  She began by relating the experience of Hamilton during the “economic heyday” of the 1950s through to the 1970s.  During this time, non-union workers at the Dofasco steel plant received relatively high wages and benefits – mainly due to the fact that unionized workers at rival Stelco had raised the bar by exerting pressure on their employers.

DuPont [chemical company] never had an independent union, and they always got paid a little more than Alcan [aluminium company].  I’m talking pennies an hour more than Alcan, which was always well-organized, and they too benefitted from having unions.

Wells explained how unions began as a form of workers’ protection in the early industrial era, when workers were seen as expendable resources (a trend she warned was making a disturbing comeback via the term “human resources”).  Labourers pooled their money together to ensure compensation in the case of death or injury: thus, she said, “if you lost an arm in Ottawa at the lumber mills, your family would get some money.” Wells went on to say:

I think that what sometimes we forget to appreciate is that the standards that many of us enjoy for wages and safety and benefits in our workplaces comes from unions and comes from people who’ve fought for them and negotiated them.  Not just wages, but benefits and also rights – the right to not be fired for no reason at all, the right to not be discriminated against for an ever-lengthening list of things, the right to have seniority respected, the rights to return to a job after maternity leave.

Today, globalization has led to dangerous backslides in workers’ rights, as transnational corporations have embraced outsourcing as a means of shifting production to countries that employ dirt-cheap labour at slave wages.  With domestic workers increasingly facing part-time, temporary employment, Wells admitted that the past decade had not been a progressive one from labour’s perspective.

Outsourcing is a way to lower wages. It’s a way to save money, and to sidestep the need for safety standards, to not have to deal with benefits.  It’s really quite lovely – just send the work elsewhere.  There are many instances in industrialized countries now of unions working with the employers trying to get around that, because the employers find that they can’t do all of the work in other countries.

She pointed to recent attacks on pensions.  Governments around the world (including Ontario’s) are currently pushing austerity measures to make workers pay for the global economic crisis, which has helped fuel the ongoing riots in Greece.

The idea that you could have an economic crisis caused basically by banks blamed on the union movement, because people make too much money and they’ve put too much aside in their pensions, is actually sort of stunning. Unions in good faith negotiated those pensions…[management is] reneging on deals here. 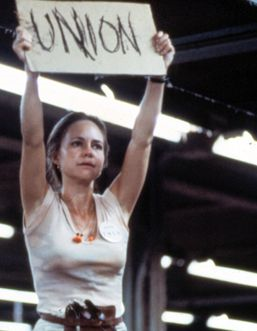 Next up was Sweeney, representative of the Public Service Alliance of Canada.  The PSAC is one of the country’s largest unions, with more than 172,000 members from coast to coast working in the federal government, its agencies, and the broader public sector (including universities and women’s shelters).  Sweeney explained her union philosophy thusly: “it really is no more complicated than having fairness and respect in the workplace, and then connecting to the community.”

She detailed how she got her start as a union organizer while a grad student at the University of Western Ontario.  Involved in student politics, Sweeney volunteered to be union steward and attended a local labour council, where she talked about homelessness and international solidarity to a stony response from the local – essentially, “what does that have to do with us?”

Those who wish to affect large-scale social change, she argued, need to prevent lines from being drawn between labour and community organizing.  Having previously worked with Burmese human rights organizations, Sweeney knows that unions must fight a perpetual battle against corporate media and big business, which tend to characterize strikes as money-grabs by greedy workers.

It’s nothing new. Now the rhetoric has shifted to ‘in these economic times…’, that there’s no longer a role for unions and we all have to get along and everybody has to give up their bit.  We all know it’s bullshit…I don’t pretend to be the expert.  All I know is why workers are choosing to organize, and it’s because of the fear of contracting out, the fear of privatization.

She criticized the prevalence of so-called “public-private partnerships” (PPPs), more often than not a euphemism for contracting out government functions to the private sector.  Yet Sweeney was not completely opposed to the idea in principle.

I think we need to keep working really hard to build bridges between the public and private sectors as well, and we’ve seen some nice examples of that with respect to the Vale-Inco strike up north…in Sudbury.  Again, big business, big company overseas…comes in, total disrespect for Canadian labour laws, and they know that it’s a challenge for us to stick together and figure it out.  Hence the importance for international solidarity, which is why, again, it always comes down to building community.

Rounding out the speakers was Andrew Stevens, who drew on his research into outsourcing to offer a more international scope on the state of unions.  That research began in 2003 when the campaign to unionize teaching assistants at Queen’s got off the ground.  Stevens quickly found that attempts to unionize TAs here encountered similar problems as efforts to unionize call centre workers in India – namely, a widespread perception that self-declared “professionals” did not require unions.

The usual question that comes up is, ‘what is the relevance of unions?’. They don’t see it.  ‘We don’t need unions, we’ve got laws, we’ve got an apparatus that protects workers’ rights.’  And I said, ‘well, who do you turn to in the event of unjust dismissals and grievances without a union?’  Call a labour board and they’ll tell you that there are really few recourses for action unless you have the capital to actually hire a lawyer and take on the case yourself.  And so, what I think has actually happened is there’s this removal of the culture or tradition of unionism in certain sectors.

In describing the need for an international workers’ movement, Stevens dug up the quote from American historian and campaigner for women’s suffrage Mary Beard shown at the top of this article.  Internationalism, he said, did not mean the abandonment of national orientations, but rather recognized a working class solidarity that transcended those borders.  He urged the creation of global union federations (GUFs) as a means of combating transnational corporations, enforcing an international law for the implementation of labour codes, and creating a commonwealth for labour initiatives.

“I guess the best analogy I would use is thinking about the global union movements as the body,” said Stevens.  “The local or the regional campaigning and the organizing is certainly the backbone, and the international federations I think operate in many respects like the nerve centre, coordinating different parts of the body and communicating limbs with the brain, etc.  So this isn’t yet a structure in which we can say there’s a massive international union, but it’s slowly coalescing into something more concrete compared to what has existed in the past.”

He emphasized that workers must be seen as a united force in order to build a movement from the ground up with GUFs.  The ongoing strike of Vale-Inco workers in Sudbury could be seen as a model; workers might also build support across different demographics by addressing social issues.  Finally, the labour movement must recognize the transitory, often temporary nature of modern employment and adjust its perspective accordingly.

For union network internationals, it has actually been about looking for ways of regulating markets and regulating labour markets, providing a union that goes with you from workplace to workplace given the very flexible and very footloose nature of employment in certain sectors, from graphic designers to engineers.  This whole idea of lifelong employment is really receding in certain sectors…what the union movement has said is that we need to create flexible unions that actually carry services and benefits and the capacity to resist throughout certain regions.

Following these three presentations, an hour-long question and answer period rounded out the evening.

2 thoughts on “The Relevance of Labour Unions Today”