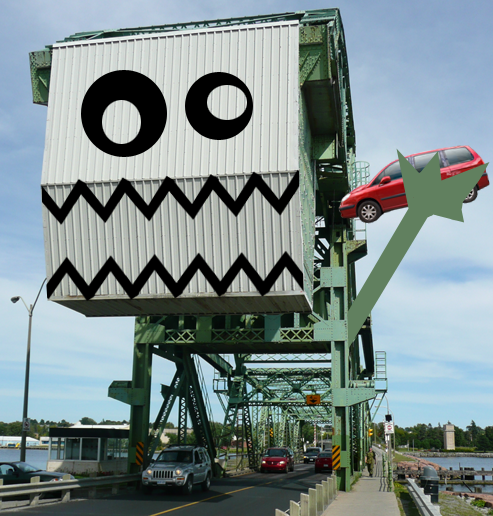 Kingston’s waterfront is a tourist magnet. Whether it’s City Hall, the Pumphouse Museum, or Portsmouth Olympic Harbour, there are a lot of unique sights for people to enjoy throughout the seasons. My constant examination of what works and what needs improvement in Kingston consistently focuses on the attractions situated along the shoreline. Why we don’t have a proper bike and pedestrian trail stretching from Lake Ontario Park to both Belle Park, and Arrowhead Beach on the east side is beyond me. But somewhere in between, the east meets the west thanks to a unique thoroughfare that connects Kingston. The “Green Monster”, otherwise known as the LaSalle Causeway Bridge, is one the big reasons Kingston enjoys a vibrant, and well used waterfront.

A brief history lesson. Back in the day, the LaSalle Causeway was a timber bridge, which operated on a toll basis. The Cataraqui Bridge Company, who owned and operated the structure, sold it in 1876 to the Department of Militia and Defence for nearly 1.5 million dollars. They in turn gave it to Public Works Canada, who is ultimately responsible for the maintenance and various upgrades the causeway has received over the years. In 1918, the toll bridge was made free to use as a part of an overall transformation of the Kingston harbour. In 1973, the Green Monster we know and love took shape with a complete overhaul, which included a steel road grate, tresses, concrete counterweight and mechanical lifting system.

Connecting Highway 2 and Ontario Street, the LaSalle Causeway Bridge is something most Kingstonians have used at one point or another. It’s hard to miss. Although it’s not the prettiest bridge on the planet, the cold steel, green paint and ghostly singing make it a unique part of the cityscape. That said, have you ever seen it in action? If you’re ever in a rush to get across the causeway to work or an appointment, chances are you’ve been caught in a long line of traffic waiting and watching ships pass between the Rideau Canal and Lake Ontario. Last Wednesday, I was lucky enough to record some video of the bridge in all it’s uplifting glory. In addition, I also snapped a few shots of the old girl, which can be found on our Flickr.

Save for the 401, it is the only way travel between the east and west shores of the Cataraqui River. With the Krock on one end, and Fort Henry and the Base on the other, many have complained that the LaSalle Causeway causes a bottleneck for traffic. This same crowd has been calling for a second crossing between the two sides of the city, which would logically connect John Counter Bvld and Gore Rd. This debate has been going on for over 40 years, and it seems as though the environment, capital and political will have thus far deterred development. What do you think? Does Kingston need another crossing? A better question is will we ever get one?

4 thoughts on “The Green Monster”