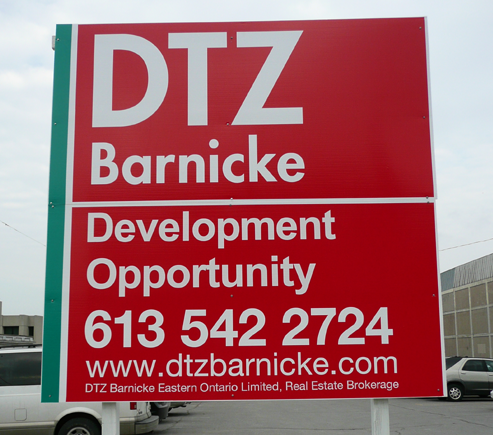 A noticeable amount of DTZ Barnicke signs have been spreading like an uncontrollable disease throughout Kingston in the past few months. These big, bright red billboards are being plastered on building facades, parking lots, and open fields, to peddle both land and office space that’s either for lease or sale. Although for lease signage is not a new element of the urban landscape, the steady influx of big red has somewhat changed my perception of our fair city. In the past, I always considered JJ Barnicke to be a small player in comparison to the infamous Springer clan, but it seems as though there’s been a shift in real estate powerhouses.

When I set out to research how much real estate the old Springer boys actually own around Kingston, I was met with a pretty sparse website, that doesn’t list a single commercial property. That said, the Springer Group of Companies is such a big player that they “donated” enough money during the revitalization and beautification of the historic Market Square behind City Hall to get it officially renamed Springer Market Square. Mediocre website aside, I think that it’s safe to assume the group still controls some strategic real estate around Kingston, as their billboards are noticeable on random vacant buildings here and there.

Canada’s leading commercial Realtor, JJ Barnicke, announced its foray into the local real-life monopoly game over the past few years with similar sparse billboard advertising. The landscape ultimately changed last Fall when JJ Barnicke was bought out for nearly $27 million by DTZ, a major global property adviser with their own coding on international stock exchanges. Thanks to DTZ’s deep pockets, the new real estate superpower controls a ton of properties, and they’re letting everyone know with an aggressive street side advertising campaign. DTZ considers Kingston as:

one of the three fastest growing economies in Canada in 2005. Last year, Kingston was named one of the Canadian Business ‘Top 40’ Best Cities for Business and in 2007 Kingston ranked sixth in their Best Places to Live ranking.

Even though there’s a perceived abundance of DTZ and Springer signs plastering Kingston, DTZ predicts that with the amount of development going on in Kingston, demand for available land, office and retail space will outstrip supply. For those who’ve overlooked Kingston due to it’s size, the recent investment in infrastructure and future potential for growth could see the city become a magnet along the 401 corridor. Although I’m not opposed to change, I really enjoy the manageable size of the Limestone City, and the comparable conveniences it offers in relation to larger centres. With that in mind, here’s hope DTZ won’t sell all the parking lots downtown.

3 thoughts on “The DTZ Takeover”