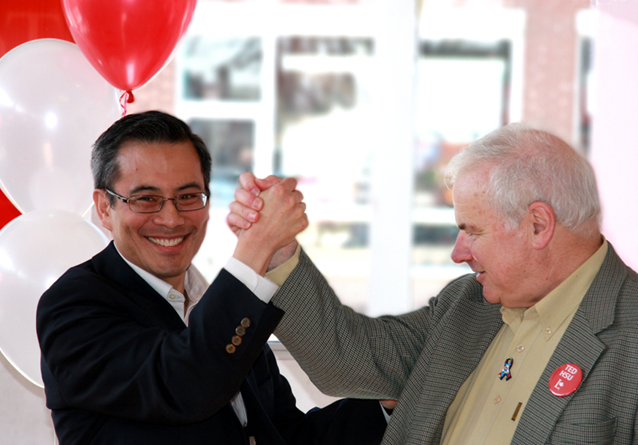 It was a nail biting, photo finish in Kingston and the Islands last night, as we elected our next Member of Parliament.  When the final ballots were counted, Liberal Party candidate Ted Hsu emerged victorious, netting 2,291 more votes than the second place finisher, Conservative candidate, Alicia Gordon.  Mr. Hsu appeared on CBC Radio this morning, where he acknowledged that, while many voters selected his Conservative, NDP and Green counterparts, he is committed to working for and representing all Kingstonians.  With a Conservative majority, new leader of the opposition, and far fewer Liberal seats in parliament, it will be interesting to see what Ted Hsu will be able to do for Kingston and the Islands.

While Kingston remains a red riding, it was a train wreck for the party elsewhere in the country.  Overall the Liberals were reduced to 34 seats, down from 77, while their leader failed to be re-elected, and he has now tendered his resignation.  For the eighth consecutive time, the Limestone City remains a Liberal stronghold, and now we’re surrounded by a sea of blue and orange.  Aside from who did or did not clinch a seat, last night’s results tell some interesting stories, especially when they’re compared to those from 2008.

Save for the Greens, all parties enjoyed gains in the overall percentage of votes they received in comparison to 2008 figures.  The nationwide NDP surge resulted in an increase of local votes by 3.98%, while the Conservatives were up 2.43%, and the Liberals were up by a small margin, 0.19%.  The Green Party attracted 4.23% of total votes in Kingston last night, which was down considerably from 2008 where they recorded 10.82%.  At this time it’s a bit too early to determine whether or not Alicia Gordon, Daniel Beals or Eric Walton will run again in the future, but I’d be very surprised if we see any new players next time the writ is dropped.

Suffice to say that our election poll was rather skewed towards Daniel Beals and the NDP, however Ted Hsu ended up on top by a few votes just before Sunday’s midnight deadline.  Not only did our election polls receive record numbers of votes, but also voter turnout in Kingston and the Islands was reportedly up in comparison to 2008.

How do you think the local candidates conducted themselves over the course of the campaign?  In spite of all the attack ads amongst the federal party leaders, were you surprised by the professionalism and respect they afforded one another during debates and interviews?  What role did social media, election signs, and visits from federal party leaders play into the local campaign?  How long do you think we have until Canada will return to the polls?

Thanks and credit for today’s photo to TeamTed.