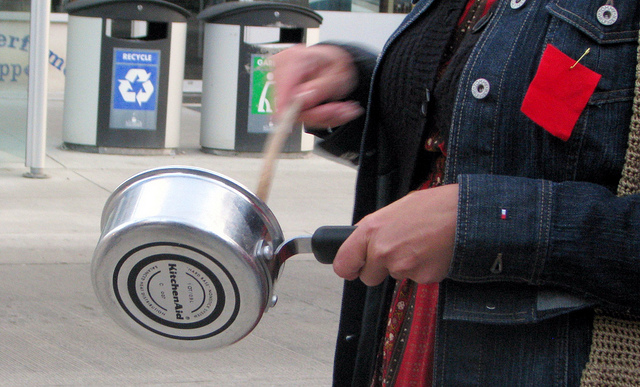 The so-called Maple Spring reached the Limestone City a few weeks ago, by way of peaceful musical protests, which meandered through downtown neighborhoods on Wednesday evenings.  Commonly referred to as Casseroles, these traffic-stopping grassroots demonstrations inspired local citizens to get out and make as much noise as possible by banging together  pots, pans and kitchen utensils. The Casserole phenomenon originated as a result the ongoing student strike in Montreal, the longest and largest in Canadian history, while the movement has sparked supportive demonstrations all around the globe.  Local supporters took to the cause for many reasons, while the central motivator was to increase awareness regarding a host of social, political and rights-based issues.  Soon after the demonstrations reached Kingston, a flyer appeared in our mailbox, while an excerpt of the invitation reads as follows:

Everyone is out for their own reasons but the common theme is we are discontent with our current government and want to show love for our neighbours and community.  If you agree with this sentiment, you belong out here with us.  Our message is changing as the weeks pass – in the interest of making a real change to our country you are invited to help us send that message.  here are the main reasons the casseroles started…student tuition…Bill 78…police brutality…Bill C-38…

While Casserole demonstrations have largely gone on hiatus for the Summer months, Quebec organizers are reaching out and working hard to ensure their message is heard across Ontario. Accordingly, this week’s poll question asks:

The protests are not going away. These demonstrations are starting to rank with major protests from the 1960s. It is getting support from organized labour, the Occupy movement, and opposition politicians. Support is coming from outside Quebec, including the U.S. and Europe. It is now about inequality and not just tuition (source). We’re seeing young people in the streets every day and (Ontario students) will be asking how does this affect me, and do I have some concerns? It seems more normal for students to be protesting than not (source).

Thanks to Laurel L. Ruswwurm for today’s photo.

6 thoughts on “Strength of Student Solidarity in Kingston?”