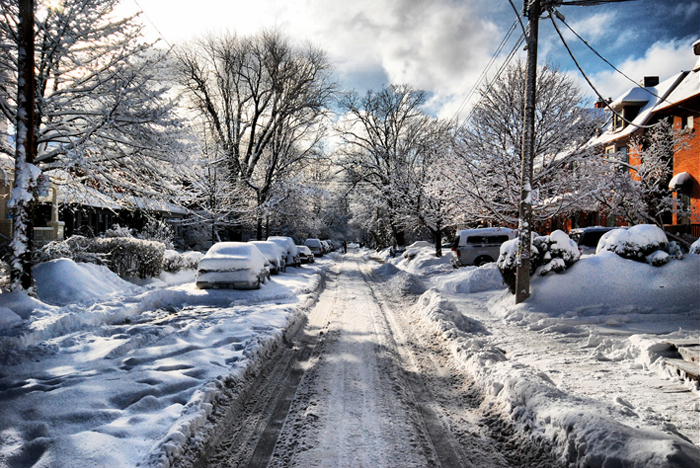 Winter routinely punches us with a snowy fist in the gut, disrupting our day-to-day and resulting in utter pandemonium in the streets.  Case in point: Christmas Day 2017, where many Kingstonians awoke to over a foot of snow smothering driveways, making roads impassable and sidewalks impossible to locate.  The scene was picture perfect for the morning of December 25th, however if your plans involved venturing out to visit friends and family, conditions complicated safe and timely travel.

And so goes the tale of one Kingstonian who was so dissatisfied with the lack of response from the city’s fleet of 30 snowplows that she took matters into her own hands, and called 911 (twice) to convey concern.  News of her appeals to 911 traveled quick, earning the caller both cheers and jeers.  On one side, shared frustration regarding how quickly the city responds (on Christmas Day no less) to dig us out on snowy days.  And on the flip side, condemnation for misusing emergency services, and unrealistic expectations when it comes to Canadian winters.

Considering your experience with both winter and snow clearance in Kingston:

The City of Kingston's snow plows do a(n):

In recent years the city of Kingston has improved their response to snow clearance, thanks to the addition of new plows to get the job done, and the availability of maps illustrating plowing routes and priorities.  Even so, with over 1,800 kilometres of roadways to clear and 600 kilometres of sidewalks to attend to, the work cannot be done in an instant.  Patience is the name of the game, and that goes double for those of us who have to trudge back outside after the plow has gone by to re-shovel the driveway.

The City of Kingston publicly states that road plowing during “normal winter conditions” will take anywhere from 4 hours for arterial roads to 16 hours residential streets.  Sidewalks can take even longer to clear, from 24 to 48 hours after a snow fall.  Of course, these timelines are approximate, and they don’t take into account severe weather events (aka snowmageddon, polar vortexes), or the availability of staff on holidays such as Christmas Day.

While there’s always room for improvement, I tend to think that the City deserves a passing grade even after the most severe storms.  What grade would you give the City of Kingston’s crews who tend the plows in your neighborhood?  Do you think roads and sidewalks get cleared quickly enough?  How would you improve snow clearance in the city, or do people need to chill out and realize this is what winter in Canada looks like?

4 thoughts on “Are Snow Plows Too Slow in Kingston?”