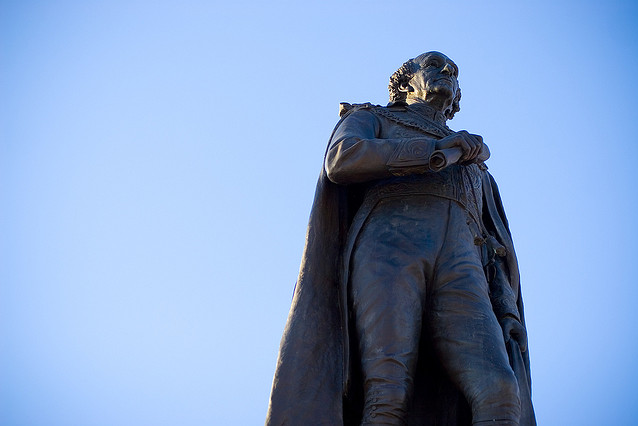 “Murderer,” “Colonialist.” These are not the typical titles that I would use to describe one of this city’s most recognizable and celebrated citizens, Sir John A. Macdonald. The harsh designations were spray painted on Sir John A.’s statue at City Park, mere hours before the public was scheduled to converge at the location to commemorate his 198th birthday last Friday. While city crews diligently responded with pressure washers and brushes to clean up the graffiti, the incident left a definitive black eye on the festivities for Sir John A.   Even so, members of the Bicentennial Commission, the Mayor and a host of local supporters who were in attendance appeared to take the act of protest, or whatever you prefer to call it, all in stride.  When asked for his thoughts on the incident, Mayor Gerretsen put a positive spin things, stating:

I hope that everybody can appreciate the subtle irony that exists with what happened this morning or late last night, which is that, it is because of great Canadians such as Sir John A. that we Canadians have the ability to express our opinions the way that we do.

The defacement of Sir John A.'s statue was:

Additional disparaging statements including: “Sir John A. Killer,” “f*ck Canada,” and “this is stolen land,” were also unceremoniously spray painted on the monument.  Many were quick to interpret the latter statements as clear links to supporters of the Idle No More movement, however campaign representatives denied any involvement in the defacement of the statue honoring Sir John A.  Kingston Police went one step further in their response to the public, stating: “the defacement could be part of an effort to smear the aboriginal movement”, and that they are “cautious as to what the motive is at this point”.

The incident has resulted in heated discussions about the cowardly defacement of public property, the right to peaceful protest, Sir John A.’s stance towards the rights of aboriginal people, as well as whether or not the Limestone City is in fact “stolen land”.  How did you interpret this incident; as vandalism, protest or both? Drawing your own conclusions as to who is responsible, what impact do you think the accusations could have on local support for the Idle No More campaign?

Thanks and credit to Tim Forbes for today’s photo of Sir John A. Macdonald’s statue in City Park, sans spray paint treatment.

18 thoughts on “Vandalism or Idle-Less Protest?”