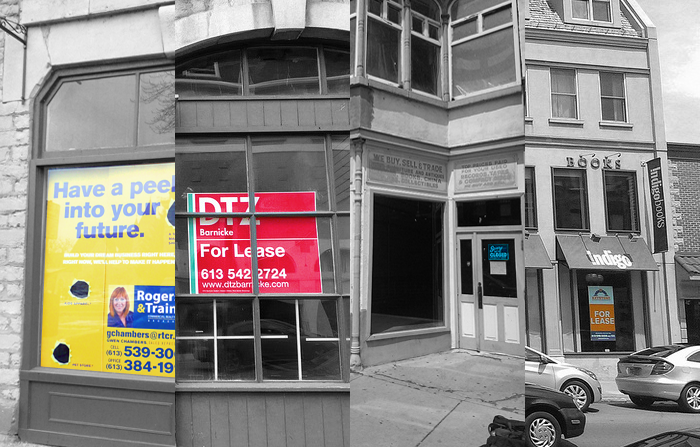 The prosperity of restaurants and retail in any given neighbourhood is intimately tied to factors such as shifting consumer demand, economic conditions and even technological advancement. Accordingly, turnover of businesses is inevitable, whether it’s in a shopping or strip mall, big box complex or in the heart of the city.   Empty storefronts and for lease signs are common across the Limestone City, however, as is the case with our downtown, some vacancies stick out more than others.

Recently, the consolidation of Chapters/Indigo into a single store in the west-end left lower Princess Street with a massive two-storey, 16,000 sq/ft void.  Although the loss of this consumer magnet is significant, the vacancy created in late 2012 by the relocation of Empire Theatre is arguably more noticeable, and it highlights the compelling forces that are pulling some of the larger businesses away from our downtown.

Just what is the normal rate of closures, openings and address changes in downtown Kingston?  This is a question I’ve asked on numerous occasions while exploring the state of our downtown.  In recent months, the heart of the city has bid farewell to the likes of Stuff’d, Luke’s, Burrito Amigo, Urban Trade, Turk’s, Indigo, Ten Thousand Villages, Novelino, Olden Green and the list goes on.  The dozen or so closures represent both corporately-owned and independent businesses, restaurants and retail, as well as well established institutions and exciting new comers.  While there is no single cause behind all these closures, some are quick to point the finger at competition stemming from King’s Crossing and the RioCan.  Further, the former downtown business owners I’ve had a chance to meet have suggested that downtown property owners are just as content to write off losses due to vacancies than offer more affordable and competitive leases.

Lamenting over the recent disappearances from downtown Kingston, this week’s poll asks:

Which business closure is the most significant for downtown Kingston?

Are you concerned about the number of businesses who have recently closed up shop for good in downtown Kingston?  Which closures surprise you the most, and otherwise, which do you think will have the most severe impact on other downtown businesses?  More importantly, what should the city, property owners and consumers be doing to stimulate and protect businesses in downtown Kingston?