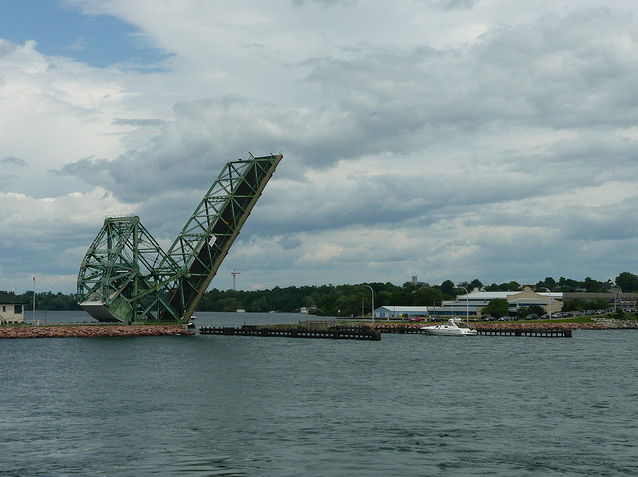 While idling on the LaSalle Causeway for what feels like the hundredth time this summer, I started wondering why on earth our lift bridge isn’t scheduled.  It seems that people getting to and from work and school should be a priority over people who are on a boating vacation.  I decided to look it up to better understand why our bridge goes up at 8am, noon or 4pm some days, when downtown is at its busiest.

As it turns out, there is a schedule.  According to a Government of Canada website, the bridge goes up at 6, 7, 9, 10 and 11am, 1, 2 and 3pm and then on the hour as needed from 6pm-10pm for pleasure crafts between May and November.  It goes up on demand for commercial vessels.  This passage of water is not sailed by large transport ships so it makes one wonder what exactly qualifies as “commercial” and why do these boats take precedence over those of us who also need to get to work?

Most recently, I have been stopped at 8am, 3pm and most consistently during lunch hour.  One of the most infuriating experiences was when the bridge went up 20 minutes before an annual symphony concert at Fort Henry – with many audience members and musicians stuck on the other side.  It seems like at the very least, special considerations should be made in the favour of getting people to and from such events.  On a similar note, I often wonder how the randomness of our bridge’s schedule affects emergency vehicles.

With a little research, I found that other bridges such as swing and lift bridges in Ottawa, remain closed to all boaters during rush hour traffic (morning, noon and evening), including commercial vessels.  Smaller towns such as Perth and Smith’s Falls do allow their bridges to go up on demand but, like Kingston Mills Locks, these bridges are not located on major thoroughfares such as Highway 2.

Now that I’ve vented my frustration on this issue, I want to know how our lift bridge schedule, or lack-thereof, affects your day-to-day.  Accordingly, this week’s poll asks:

Should the LaSalle Causeway lift bridge schedule be more predictable?

While I sit in the long line, I often think about all the cars idling around me.  We are supposed to turn our engines off, but how many people actually do that?  Especially mid-July when it’s 30+ degrees outside.  The line of traffic must contain close to 100 cars in either direction and then there are parking lot entrances and side streets to consider as the line meanders down King Street stopping traffic in its tracks.  What is the solution to this problem?  Of course, the costly third crossing will certainly help, but in the meantime, how could the city adjust the causeway’s schedule to make the use of the bridge more convenient for Kingstonians?

One thought on “Improving the LaSalle Causeway Schedule”