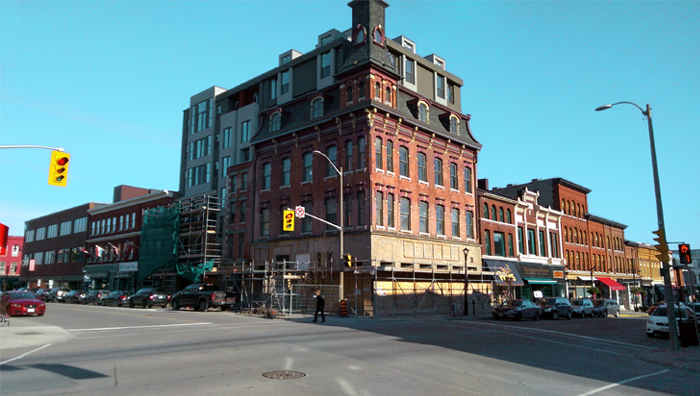 On December 30th, Kingstonians got their first glimpse of the newly restored and radically renovated corner of Wellington and Brock. Over the past two plus years, the five-storey red brick known as The Kensington, underwent significant renovations in order to bring it back into the fold as a vibrant commercial and residential rental.  Ambitious developers didn’t stop there, as the adjacent property at 165 Wellington Street also went under the wrecking ball to receive a surprisingly modern addition.  The resulting contemporary structure grew by three storeys, and butts up against it’s neighbour’s bricked facade, stately dormers and charming tower.  While the scaffolding and netting have yet to be totally removed from this work-in-progress, the end result will be a striking upgrade that walks that fine line of preservation and progress.

With changes to The Kensington still taking shape, this week’s poll asks:

How do you grade this downtown (re)development?

At this late stage in development, I think that the overall aesthetic of the modern addition is complimentary to its historic surroundings.  With the right commercial tenant on the ground floor, this project has real potential to energize this previously underappreciated slice of Wellington Street, making it a coveted destination to live, work and play.  Even so, I appreciate the criticism voiced by others regarding choice of materials, which tend to be cold and maybe even a touch too minimal.   Perhaps the saving grace is that it’s not entirely clad in glass, like so many other new builds we see.  While some may argue that the original height of 165 Wellington should have been maintained, this slight leveling of the block is far more palatable than the sort of towering beanstalk being contested vis-a-vis The Capitol.

When is it acceptable to tear down the old to make way for the new? How strict do heritage guidelines need to be in order to protect our downtown’s unique, historic charm? When and where is it acceptable to knock something down, so that we may breathe new life into a city block? No matter who you pose these questions to, you’re bound to get a different answer, which is exactly what makes any development in downtown Kingston so contentious. What are your thoughts on the height, the materials, and the re-integration of The Kensington with its surroundings?