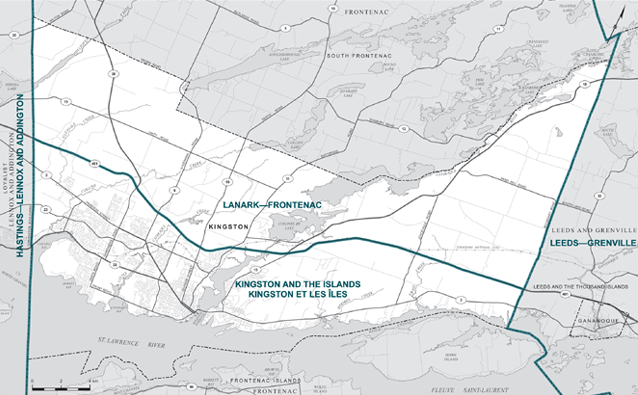 Created in 1966, the electoral district known as Kingston and the Islands has been a stronghold for the federal Liberal party for 25 years, since 1988 to be exact.  In recent times, the district’s population has inched above 125,000, while the Federal Electoral Boundaries Commission calculates the average population of federal electoral ridings at 106,000.  This discrepancy, paired with recommendations stemming from a review of electoral districts that occurs every 10 years, has led to widespread speculation about whether or not boundary lines for Kingston and the Islands should be redrawn.  The Commission’s report makes the following recommendations:

In case you don’t have your current electoral map handy, the recommendations would essentially shift the northern boundary of Kingston and the Islands’ riding down to the 401, while the area north of the highway would become a part of the Lanark-Frontenac-Lennox and Addington.  Accordingly, this week’s poll asks:

Do you support the proposed changes to our riding's boundaries?

If these proposed changes are adopted, their first test would be during the October 2015 federal election.  In that eventuality, for me, there really isn’t any change as I would still cast my vote in the Kingston and the Islands district.  Does that mean better representation for me and the other 116,996 constituents?  I’m not entirely sure.  That said, I am fearful that the recommendations could fragment the city by way of lumping the rural voters residing north of the 401 into a huge Conservative riding with vastly different needs and competing priorities.  While some have pointed out the benefits of having two MPs with a stake in representing Kingston, the advantages delicately teeter on whether or not the MPs are wearing the same stripes as one another, and their relation to the ruling party.

What are your thoughts on redrawing our riding’s boundary lines?  Do you think Ottawa should leave well enough alone, or do you support the changes as a result of better representation and a sharper focus on urban voters.  And what about our friends in rural Kingston? Are you keen on joining Lanark-Frontenac-Lennox and Addington, or not?