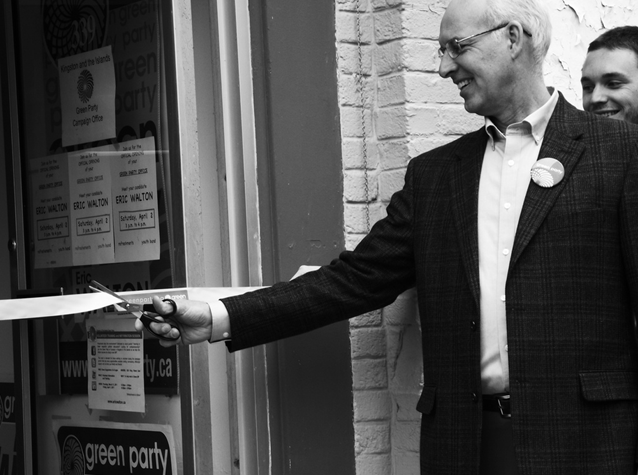 According to CBC, over 4 million Canadians tuned in to watch the English version of the federal leaders debate last week.  Now if only we could figure out a way to vote via television on May 2nd, Canada might have a chance at improving our deplorable voter turnout.  While 62% of Kingstonians exercised their democratic right during the last federal election in 2008, which was just over the national average of 59.1%, it remains to be seen as to whether or not our new overlords will once again be elected by a minority of Canadians.  Further, with the local race being labelled as too close to call, thanks in part to the strength of the candidates and the retirement of Mr. Milliken, Kingston and the Islands’ representation at the federal level is equally unclear.

Have you taken the time to get to know the local candidates?  Rather than simply regurgitate their bios, we thought a better approach would be to send each of them a few questions, six to be exact, and help people make their decision before election day.  Whether you want to know where our candidates stand on re-opening prison farms, the necessity of a third crossing, or what they think Kingston will do about aging infrastructure once all that federal stimulus money dries up, send us your questions by commenting below.  While all of the candidate may not participate, I’ve already received confirmation that two of them are ready and waiting to answer six questions.

Please ensure that your questions are applicable and directed to all parties, giving each candidate an equal opportunity to respond. As a bit of incentive, if we end up using your question, we’ll send you one of our fantastic, impossible to get anywhere else, Kingstonist tees.  What are you waiting for, drop off your questions now.

Thanks to Eric Walton for today’s photo, which was uploaded to our ever-growing Flickr group.

8 thoughts on “Ask Our Federal Candidates”