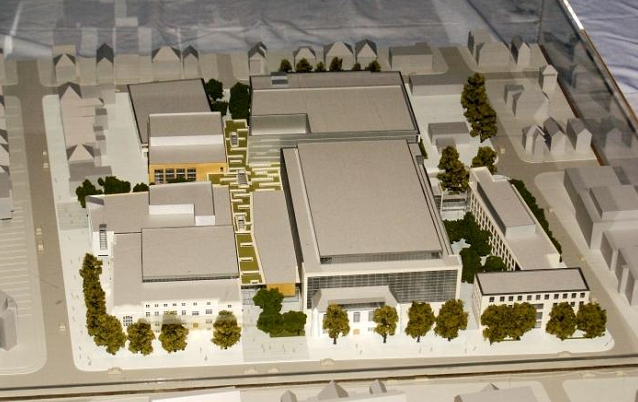 When it comes to iconic, multi-million dollar construction projects that will shape the Limestone City of tomorrow, Queen’s University has them in spades.  From the newly announced waterfront Performing Arts Centre to the revitalization of Tindal Field, and the athletic and social mecca known as the Queen’s Centre.  For those of you who haven’t visited campus in the past year, the latter is a massive construction project that was divided into three parts: Phase One:  School of Kinesiology, gymnasiums, weight, workout and locker rooms, and an aquatics centre; Phase Two:  Hockey arena and field house;  and Phase Three:  Student-life centre.  When the ribbon is finally cut, the $230-million Queen’s Centre will span two city blocks, and serve as essential infrastructure for generations of future alumni.

Back in late February, the campus newspaper reported that the Queen’s Centre was experiencing cost overruns as a result of a boom in the construction industry. At that time, the Journal stated that $124-million had been set aside for phase one, while the actual costs were already $41-million dollars over budget.  Now to me and probably you, $41-million is a drop in the bucket, so I figured that Queen’s huge endowment, and their long list of wealthy alumni would cover the difference.  Then I learned that the overall price tag of $230-million was expected to burden the institution with $60-million worth of debt.  Therefore, unless someone donates a sizeable chunk of change to Queen’s, significant design modifications will have to be made to ensure the price tag does not exceed the budget.

In light of this fiasco, earlier this month Queen’s announced that they had to suspend construction of phases 2 and 3 until they could secure additional financing.  The Journal quoted Associate Vice-Principal (Facilities) Ann Browne as saying: “Very simply, I have been told when we have funding, we will move forward. Until we have funding we will not be moving forward at all. That’s a difficult decision to have to be made at this point in time.”  So ultimately this obstacle will delay the completion of the Queen’s Centre, but could it also hinder future projects such as the Performing Arts Centre?

I assume Queen’s has two separate pots of money for these respective buildings.  Although an upgrade to their athletic and social infrastructure is warranted, I would argue that the arts are equally in need of the boost provided by a new piece of real estate.  So, based on the assuption that the waterfront Performing Arts Centre is still a go, do you think it’s  wise for Queen’s to proceed with construction on their new arts project, while the Queen’s Centre is left partially complete?  Will donors be less likely to come to the rescue now that Homecoming has been cancelled moved?