Since its inception in 2010, our Community Soapbox has allowed Kingstonist readers to contribute their thoughts and ideas to the site through op-ed posts.  We have published numerous submissions covering various topics from cycling in Kingston and the great casino debate, to skate parks and election signs.  We love to hear from our readers and hope to see more submissions in 2015.  Anyone can participate.  If you’re interested in standing on top of Kingstonist’s soapbox, please submit your edited, spell checked, non-discriminatory, Kingston-centric submissions to us here. Today we’re featuring a post from August written by Craig Walker regarding new development in his neighbourhood.
—————————— 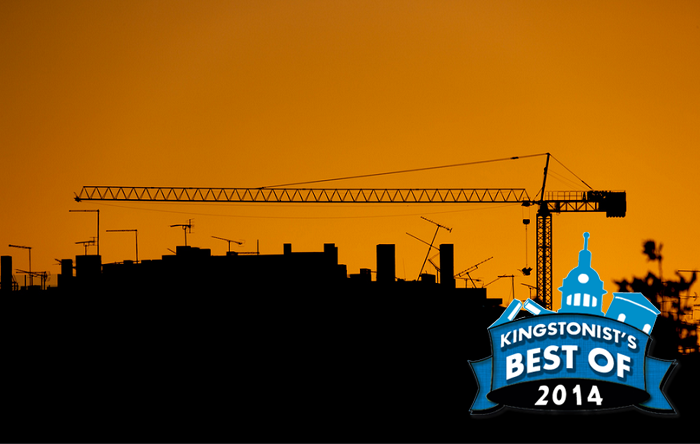 Anyone who has been following discussions about large new development projects in Kingston over the last few decades is bound to have experienced a disquieting sense of déjà vu about the proposed new development on Frontenac Street, which was described in The Whig-Standard by Paul Schliesman in his article “Apartment Project Under Fire” (July 21) and which has been the subject of much discussion in the community. A careless observer might dismiss this as one more argument between those who are “pro-development” and those who are “anti-development,” with a third, most despised category reserved for NIMBYism, i.e., “pro-development but not in my backyard.” Those who have lived in Kingston for a longer time should know better than to accept such a simplistic and futile characterization of what ought to be a much more complex discussion. The idea that each new development proposal inevitably must turn into a face-off between groups of inflexible extremists is too dismal to persist. We have more than enough monuments to its destructiveness: sad, vacant brownfields on the one hand and hideously ill-judged monstrosities (Princess Tower anyone?) on the other.

Let us start instead by agreeing that we Kingstonians need to be both pro-smart development and anti-reckless-development, and that there is no contradiction between these two stances. How do we decide the difference between smart and reckless developments? Well, there is no shortage of guidance about that, starting with Jane Jacobs’s classic 1961 rethinking of urban planning, The Death and Life of Great American Cities. A smart development is one that shows an awareness that the neighbourhood into which it is being introduced is a sort of ecosystem, one that can be helped to thrive with appropriate developments or poisoned by either sustained neglect or by inappropriate developments. I am not saying anything original here: Kingston’s City Council has shown admirable vision along such lines through the Official Plan, the Williamsville District Study and also through the accumulated wisdom of a large body of zoning by-laws. Where Council has failed us is with some of the final decisions it has made in which it set aside all of its accumulated wisdom and carefully cultivated plans.

This brings me to the case at hand, PatryInc’s proposed “501 Frontenac” development. To offer full disclosure: I live just up the street on Frontenac; but, far from not wanting to see developments in the neighbourhood, I would be delighted to see a sensible, attractive, low-rise, multi-user apartment building go up in that space. Now, because a 58-unit development proposed by PatryInc in 2008 had been rejected as excessive (a rejection upheld at the OMB), we in the neighbourhood expected the next proposal to be more sensible, more in keeping with the character of the rest of the residential street and with the by-laws. Instead the new proposal was for a much larger 71-unit, 250 bedroom building intended solely for students. The proposed building would exceed the dimensions established by the by-laws by about 250%. It would be higher and closer to the lot on every side, the occupancy will be denser and there will be far less amenity space and parking than the bylaws allow. And the smouldering elephant in the room, recalling the huge fire that started in Patry’s building at Princess and Victoria and spread to neighbouring houses, is this: there will be almost no buffer between it and its neighbours and no fire lanes that would allow a fire to be fought from more than one side. That the building meets Provincial codes is no answer. That is why we have a Municipal level of government: to set appropriate local standards within those maximal limits. By any measure, this is a reckless development. It was unsurprising that, at the very well attended Public Meeting, speaker after speaker, including our elected representative, Williamsville District Councillor Jim Neill, spoke against the project. In other words, public opinion was overwhelmingly, unequivocally against seeing this particular development go forward.

However, that meeting was the sole formal opportunity for public input. After that, a series of behind doors meetings was held between PatryInc and city staff, the result of which was no more than a few changes to the interior of the building. And then these city staff, who are not elected and who are therefore not accountable to, nor representative of the public, recommended that the project be approved, notwithstanding that the main substance of the many public complaints remained unaddressed. Then the Planning Committee voted to accept the city staff recommendations at another meeting at which the public was not allowed to speak to the supposedly “revised” proposal. And the whole matter would have been finalized at a July Council meeting, by the unseemly means of three rushed readings in a single sitting, had there not been some serious procedural irregularities that made Council decide to defer the matter until August.

So, my overwhelming question has less to do with this one development than this: why is there not more regard for democratic process at City Hall? Why is any developer allowed to “play” the system by making a grotesquely excessive proposal over which the single opportunity for public input is exhausted, and then, by making a few token amendments behind closed doors, allowed to claim that the new plan is a “compromise.” When one writes to the City to ask why such a blatant disregard of bylaws is being allowed, the reply is that “each application is reviewed on its own merit.” But this dismissive boilerplate response only raises more questions. First, why do we have zoning by-laws and official plans at all if each application is to be reviewed separately? Those bylaws and official plans are the result of extensive democratic processes: one understands that some flexibility is needed in their interpretation, but to so blithely disregard them shows a contempt for democratic principles. Second, what exactly are the so-called “merits” of this building? The City’s planning department is completely silent on that question, and little wonder. In a neighbourhood featuring one of the healthiest blends of families and students in the city, this project will introduce a grossly over-crowded, massive student residence with a design that will permanently exclude any families; although one couldn’t call it the ugliest building in town, its merit is certainly not exceptional beauty and the structure is more enormous than anything else nearby; and bizarrely, it inappropriately places a type of building on a residential street that, with some revision, would be perfectly appropriate and acceptable on Princess Street in keeping with the Williamsville District plan. All of that makes the plan seem antisocial. But worst of all, it takes all the dangers of the Patry’s torched building at Princess and Victoria and puts them, absent a buffer zone, into a residential neighbourhood.