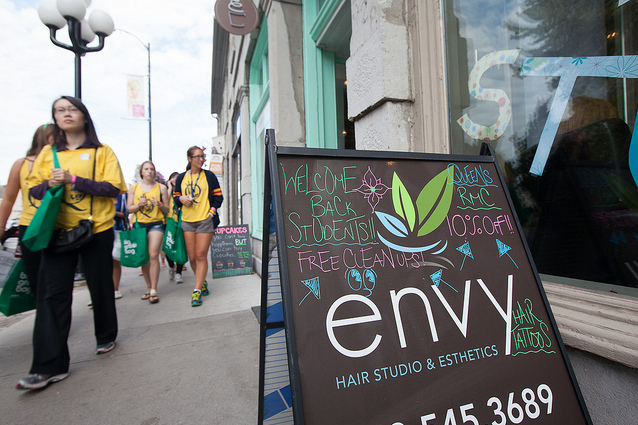 The first week of classes have ended for most post secondary students returning to the city. With classes underway, Kingston’s downtown core has been busier than the recent tourist-filled summer months.

Students play an important role within the city. As volunteers, students help contribute to a host of positive programs and initiatives. As consumers, the local economy sees a boom in business which allows them to offer exciting new services and products to the population. This puts Kingston in a unique position to harvest the potential of eager, intelligent, and passionate youth. Take for example the student led start-up company, Charge Centre. Their initiative seeks to enhance customer service at venues within Kingston by providing mobile charging device stations at businesses such as the Grizzly Grill and Milestones.

However, as a whole, students have had a strained relationship with the city. City council voted to omit students from census data collection. In April, City Council voted to eliminate the Sydenham district, which is heavily populated by Queen’s University Students. This act disenfranchises students by removing their representative. Student leaders responded by noting that the elimination of the districts disenfranchises student voters and weakens their representation on city council.

Should post-secondary students have their own Councillor?

Thomas Pritchard, Vice-President University Affairs of the Alma Mater Society recently stated, “Students are citizens of Kingston: we pay taxes via our rent, we buy goods and we frequent the many services and establishments in the downtown core”. This emphasizes the significant contributions students make to the city.

Recently, the issue had been referred to the Ontario Municipal Board which will determine whether or not the district should be eliminated. The Alma Mater Society, The Society of Graduate and Professional Students, and the Sydenham District association have united to argue against the changes to the district.

Thanks and credit to Queen’s University for supplying the photo associated with this poll.

5 thoughts on “A Student Representative at City Hall”