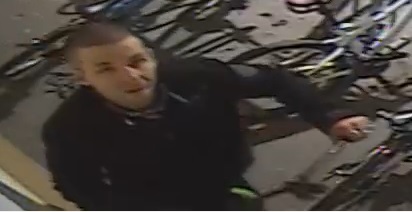 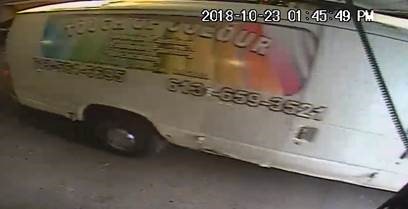 Kingston Police have released the above photos as they try to identify the suspect involved in a break and enter and theft last week.

On Tuesday, Oct. 23, 2018, the bicycle storage room at 310 Bath Road was broken into at approximately 1:20 p.m. The suspect cut locks from bikes and multiple bikes were stolen.

At approximately 1:45 p.m., a van stolen from the same address was caught on camera as it exited the underground parking garage. The van is a 2005 white Ford van with the ‘Touch of Colour’ logo on both sides and on the back door. The suspect driving the van appears the be the same suspect responsible for the break and enter and theft of the bicycles.

The van is one of several company vans, so police are asking the public to report sightings of similar vans if they are being driven or parked in a suspicious way, or if the van is bearing the original Ontario licence plate 9387VX.