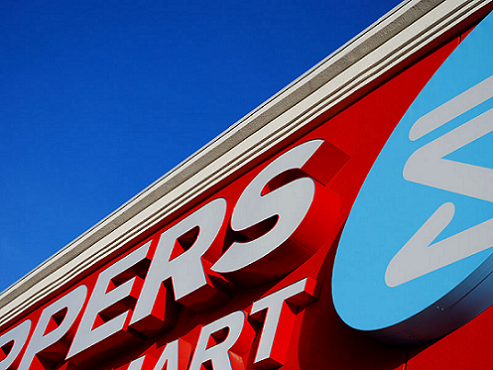 Many Kingston residents know, and perhaps love Herbies, purveyor of discount food and drugs. It has enjoyed prime real estate in a plaza that has seen better days on the corner of Princess Street and Centennial Drive. Once a neighbor to Winners, and a myriad of other failed businesses, Herbies survived where others could not. This past Spring I noticed a new retirement centre being constructed on the doorstep of the Cataraqui Town Centre, and I knew right away that Herbies would benefit. But on a recent trip out to mall, I was shocked to see a huge structure being built in the Herbies plaza parking lot, which displayed a Shoppers Drugmart – Coming Soon sign.

“Shocked” might be a bit of an exaggeration, but needless to say I was certainly not expecting another Shoppers Drugmart to sprout up in the area. The Cataraqui Town Centre already has one on the south side, and by rights, it is far closer to the new retirement building than Herbies. That said, the newer community on the north side of Princess Street, located just behind Chapters, Rona and all the others, might be more apt to visit Herbies than the Shoppers Drugmart at the mall, simply due to sheer convenience. So is this a case of strategic positioning, or canabalistic capitalism, the latter being an attempt to squeeze old Herb out of the game.

I hate to say it, but I’ll give Herbies 2 years before they have to close their doors. I mean, I don’t know who they get their “discount drugs” from, but surely a Canada-wide chain has a lot more purchasing power to negotiate lower prices and pass on the savings to Joe Six Pack. By the looks of the new Shoppers, it is going to be a beast, and will probably include their new, albeit limited, grocery store-style section. In addition, the new(ish) grocery store less than a block away is also a chain, and thus they are probably able to offer cheaper prices than Herbies. There’s only so much they can discount before they start to lose profit.

It’s not the first time we’ve seen Shoppers, or another business set up shop in someone else’s territory. Shoppers took up refuge on Bagot and Princess a few years back, and it is now quite a busy store. But this has not pushed other local pharmacies out of the same block. Starbucks would have to be the biggest culprit downtown, as they opened a store right next to the Sleepless Goat, and another one across from Coffee and Company near Queen’s. Although they could only dream to take clientelle away from the Goat, they were successful in diverting enough customers away from Coffee and Company that they had to close up shop. And as I said, I think it’s only a matter of time before Shoppers establishes a monopoly, and Herbies is forced to close up shop.