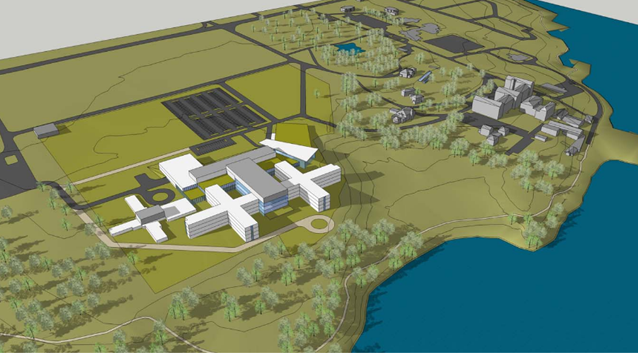 This past weekend it was near impossible to make your way around Kingston and not come across one of the fifty-five polling stations that had been established to gauge public opinion regarding the public private partnership (P3) funding model that’s being considered for our new 270-bed hospital.  The Providence Care project is one of the largest investments in health care Kingston has seen in decades, while it would amalgamate programs from St. Mary’s of the Lake Hospital and Mental Health Services under one roof in a sprawling facility on King Street West.   Staffed by dedicated teams of volunteers, the referendum organized by Kingston Health Coalition is the latest evolution of the Keep Our Hospitals Public campaign.  While results from last weekend’s poll are set to be released later this morning, Chair of the Kingston Health Coalition, Ross Sutherland, outlined the importance of the campaign and public consultation as follows:

The evidence shows that P3 privatization costs more and the higher costs would siphon millions of public dollars away from needed health care services to the for-profit consortium. There are better alternatives that would ensure that the new hospital is built without long-term privatization contracts and financing. We will continue to advocate with the provincial government to have these long-term contracts removed from the deal and we look forward to the final vote count and the community’s say in the process.

With early estimates reporting that over 5,000 Kingstonians were counted in the referendum, this week we’re aiming to keep the conversation going by asking our readers for their take on keeping our hospitals public.  This week’s poll asks:

Are you in favour of p3 funding model for Kingston's third hospital?

So just what is a P3 funding model, and why is it so contentious?  That depends on who you ask.   In this case, the P3 model would solicit support from private sources such as banks and property management companies who would in turn front the $350-million required to build and maintain the Providence Care facility.  One of the biggest bones of contention stemming from the P3 funding model is that it would redirect an estimated 20 to 30 million dollars of the overall budget directly into the pockets of those providing financial support.  Kingston’s MPP, John Gerretsen, insisted that “without the P3 funding model, the new hospital wouldn’t be built, as the province doesn’t have the money to foot the bill”.  Nevertheless, P3 horror stories such as the case in Brampton, who experienced expenditures in excess of 100 million dollars more than the original budget, serve as cautionary tales for other communities considering similar arrangements.  While Premier Wynne was quick to point out that P3 models have delivered results on time and on budget, suffice to say that’s not a guarantee Kingston’s third hospital would be bound to these targets.

What are your thoughts on the P3 model?  At the risk of putting the brakes on this project, should Kingstonians take a firm stance and demand public funding?  Or could we stomach a P3 model if the amount paid to private interests was drastically reduced and more reasonable?

2 thoughts on “Should We Keep Our Hospitals Public?”