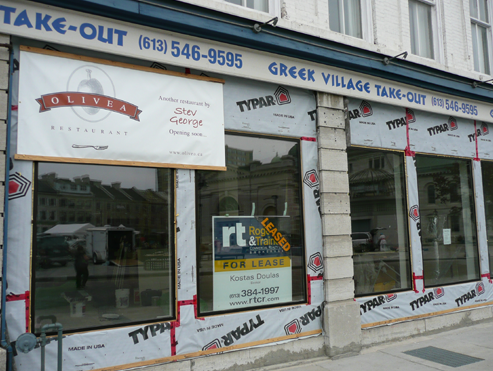 Walking around downtown, and driving throughout the township this weekend really opened my eyes up to all the new development that’s been going on throughout Kingston. Everywhere you turn there’s a new building being constructed, or leased sign posted in a future storefront. Then there’s the sprawling construction site bordering Division and the 401, which developers hope will become a shopping mecca for passersby who will no longer be able to resist the urge to stop in Kingston. Although it’s positive to see such growth around the city, I’m weary that it might be too much all at once.

Turning to the restaurant business, Mexicali Rosa’s is making final preparations to their new location on Johnson and Ontario, that includes an intimate patio around back, which will rival the other fajita slinger on the street. Around the corner on King and Brock, a new restaurant called Olivea will be taking the place of Greek Village, which was destroyed by a fire a few years ago. I’m not certain if this place will specialize in Italian or Greek cuisine, but you can help them choose their menu online. Out on Bath Rd, Sakura sushi will attempt to succeed in the same location where Nichols, and Shoeless Joes have failed. All and all, I think that Kingston can sustain most of these additional restaurants, especially with an influx of people coming into the city as a result of the Krock, Queen’s Centre, Block D condominiums, and Kings Crossing projects.

Then there’s the commercial retail racket, which is also booming. As successful as the Gardner’s Road RioCan Centre is, the traffic scheme and general aesthetics are utterly disastrous. Do we really need another unimaginative big box monstrosity, that is bound to be created by the King’s Crossing project? Sure we might end up with an H&M, and Calvin Hillfiger Outlets, but the trade off is endless parking lots, and countless traffic jams. Furthermore, this really only brings people into the outskirts of Kingston, and not all of them are going to venture downtown or into the township to inject dollars into the local economy. Urban Outfitters is still plugging along with their downtown location, but it does not look as though it will be ready until July. On Princess and Clergy, a famed over-priced clothing store has died, only to encourage another “we sell $75 t-shirts” to spring up a few blocks down Princess. Paradoxically, this is directly across the street from a huge dollar store.

Surely there are stores that will work in Kingston, however flooding the market with too many retail options may only hurt the little guy, who is typically located downtown. Then again, there’s the “if you build it, they will come” mentality, which translates into increased business for all. But with the price at the pumps increasing, retail shopping may take a hit across the board. What sort of restaurants, or businesses do you think Kingston could actually support? What’s the most you’ve ever paid for a t-shirt? Check out the construction madness, and Spring maintenance documented in our new Flickr set.