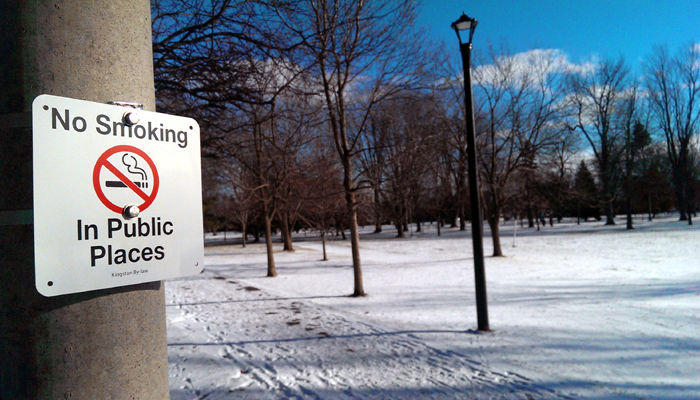 The Ontario government’s “Smoke-Free Ontario Act” came into effect on January 1st and brings with it some major changes for Ontario smokers.  The act bans smoking anywhere “the public is ordinarily invited or permitted access to the area,” which means no smoking with a pint and a burger on a sunny downtown patio.  This isn’t new to Kingston though.  This law has been in effect in The Limestone City since 2003 and laws banning smoking in parks and at bus stops came into effect here in 2012.  The province-wide “Smoke-Free Ontario Act” stretches beyond patios and parks and introduces some much stricter laws regarding smoking in public spaces.

As of January 1st 2015, smoking within 20 metres of a playground will result in a hefty fine.  This includes both public and private property such as a hotel or motel that has a pool or playground, as well sports fields and even areas on public beaches where there are volleyball courts.  The law continues to extend to post-secondary institutions.  Universities and colleges are no longer permitted to sell tobacco products on campus, nor are any other public or private institutions that can be defined as any sort of “school”.  Many schools have already taken it a step further by banning smoking on campus altogether.  While this has yet to occur in Kingston, all of our post-secondary institutions have made moves to limit smoking on campus.

These new laws have been met with both cheers and jeers from Ontarians.  Those who applaud the new act feel the changes are necessary to protect non-smokers from second-hand smoke.  The reduction of smoke-friendly environments is also meant to lessen the appeal of smoking and to keep young people from even beginning to smoke in the first place.  While it has been proven time and time again that smoking is not good for us, there is also worry that establishing these kinds of strict laws can lead to a slippery slope when it comes to protecting people’s right to choose.  Smoking is not illegal but many smokers feel that they are being forced to hide in a corner when partaking.

Considering both sides of the argument and looking at the impact anti-smoking laws have had thus far, we want to know:

What do you think of Ontario's new smoking laws?

While new laws and rising prices will encourage a few lifetime smokers to butt out, the reality is that these laws are really aimed at changing the future of smoking in Ontario.  Since smoking has been banned from public school properties and prices have sky-rocketed, Ontario has seen the number of teen smokers drop by half.  At the same time, the overall number of smokers in our province remains the same.  Perhaps these new tactics will lead to fewer people taking on the habit later in life but for now, that remains to be seen.

Are you a non-smoker, a smoker or perhaps an ex-smoker?  Tell us your story and how it affects the way you look at these new anti-smoking laws.