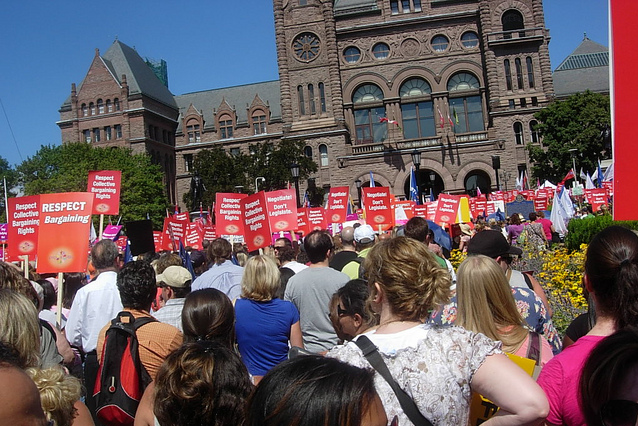 Last Tuesday, Bill 115 passed a final reading in the provincial legislature with 82 MPPs voting in favour, and 15 (NDP) MPPs opposed. The controversial legislation, known as the Putting Students First Act, was implemented to avoid a possible teacher’s strike and help get the province’s finances back on track.  Premier McGuinty explained the move as follows:

We have to protect our public services while eliminating our deficit.  In Ontario, we have a plan to balance the provincial budget by 2017-18. Our plan will grow the economy, create more jobs and support our schools and health care. It calls for hitting the pause button on public-sector pay – this affects all public servants, including our teachers.  We had a choice to make: a pay raise for teachers and continuing with bankable sick days that could be cashed in upon retirement, or focus education funding on the classroom. We can’t do both. So, we chose the classroom … our new education law secures $2-billion in savings. This makes it possible to finish rolling out full-day kindergarten and keep class sizes down – so our students can keep improving their test scores and graduating in even greater numbers. In short, our plan continues our progress in our schools.

The province’s decision to forgo collective bargaining has generated tremendous opposition from teachers, unions and supporters from across Canada. Following the announcement, teacher’s were urged to wear black and pass on extracurricular clubs and activities as a part of a one-day demonstration of solidarity.  With uncertain times ahead for teachers, students and parents, this week’s poll question asks:

Do you support Bill 115, the Putting Students First Act?

Since the approval of Bill 115, teachers have been on the offensive regarding the government’s refusal to negotiate at the bargaining table, stating that the province’s attempt to impose unprecedented terms and conditions will be met with legal/constitutional challenges. The Elementary Teachers’ Federation of Ontario (ETFO), who represents over 70,000 teachers, occasional teachers and educational support personnel outlines the impact of the Putting Students First Act as follows:

As someone who experienced four teacher strikes as an elementary and secondary school student, I can fully appreciate the negative impact failed negotiations have on the education system.  Freezing wages and cancelling the accumulation/cash out of sick days may be widely acceptable, but legislating rather than negotiating a unionized labour agreement is an entirely different story.

What are your thoughts on Bill 115?  Are you worried or optimistic regarding probable legal challenges?  Drop off your thoughts below.

Thanks to andres musta for today’s photo from the ETFO rally at Queen’s Park to protest anti-union legislation.