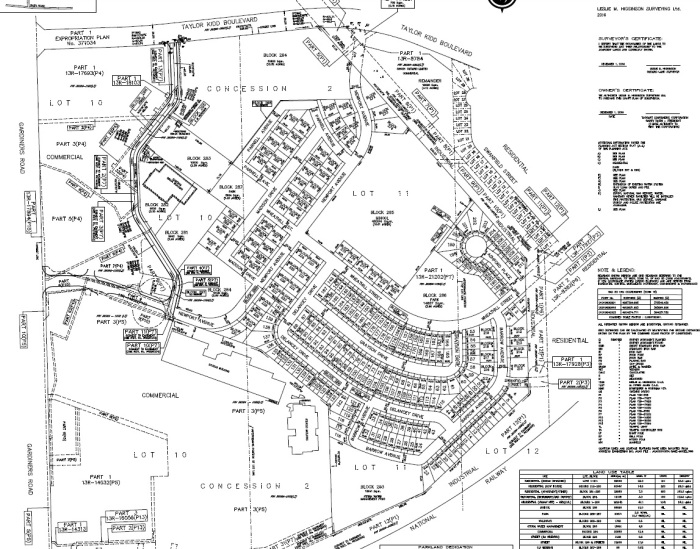 Last Summer, the Ottawa-based developer behind Tamarack Homes proposed the demolition of the former Nortel factory, adjacent to the Gardiners Road Rio Can Centre, to make way for a sizeable, 1,018 unit subdivision.  The specific details of Taggart’s ambitious (draft) plan for the 100 acre plot of land included:

After receiving the proposal, studies were conducted and concluded that there was little possibility of the land ever being used for industrial purposes.  Accordingly, last week City Council formally approved changes to zoning and the official plan to make way for mixed residential and commercial development at this longstanding brownfield.   In a statement on Mayor Paterson’s website, he welcomed the news by highlighting the benefits of the project:

This redevelopment within our urban core fits with the vision to make Kingston a smart and livable 21st century city by including a variety of housing options, commercial conveniences, green space and active transportation. The future residents in this area will be able to walk to the Rio Can Centre for shopping, they will have easy access to Kingston Transit express bus routes, and the city will see a sizeable increase in tax revenue as the land is converted from a vacant industrial lot to a thriving neighborhood in the centre of our city.

Considering the fact that Nortel’s former home in Kingston has sat vacant for over 15 years, this week’s poll asks:

Is a residential subvision the right fit for this property's redvelopment?

On the plus side, this new subdivision will provide a substantial increase to the city’s tax base, as well as rehabilitate a long standing derelict industrial site that was unlikely to see a new job-producing tenant in the foreseeable future.  It’s also worth noting that the location of this subdivision doesn’t contribute to urban sprawl, rather it adds density well inside the city limits.  With decent connectivity to already existing public transit and cycling routes, two green spaces, the possibility of a school and a recreational trail on the hydro corridor (non-binding on the developer), I think it’s safe to say that the future neighbourhood at the former Nortel site deserves a passing grade.

Even so, with sky-high condos being the talk of the town in other parts of the city, I have to wonder why developers behind this project stopped at three 12-storey apartment buildings.  With population density, green space, tax revenue and accessibility for seniors serving as driving forces, wouldn’t more apartments and taller condos have been a better option than a sprawl of 500 plus single family homes and row houses?  If you could design this new neighbourhood, how would you tweak it to better reflect the direction Kingston should grow as a city?

One thought on “New Subdivision Planned for Former Nortel Site”