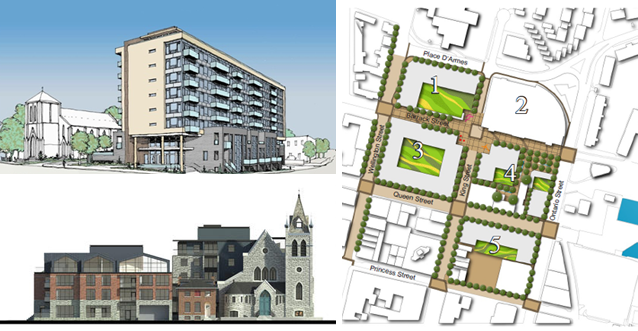 Just over a year ago, it was announced that the massive hole at the corner of Bagot and Princess would become Anna Lane, a condo development that makes it easier to come up with an initial down payment. The building’s design sort of fits with the surrounding neighbourhood, which includes boxy buildings such as Staples and the LaSalle Mews, limestone and red brick row houses as well as St Pauls. Three blocks up Queen, another condo development was recently unveiled, while this project would envelop Queen Street United Church and many of the adjacent homes. A few blocks in the other direction of Anna Lane is the massive North Block build, while details regarding this district are still being hammered out. Although high and medium rise condos are not a new phenomenon in Kingston, these new north-of-Princess residential complexes signal what the future has in store for our downtown core. Accordingly, this week’s poll asks:

For as long as I can remember, downtown Kingston has had a small handful of condominiums located at the foot of Clarence and Johnson respectively.  Following the settlement of the decade-long Block D debacle, two new condos and a hotel positioned themselves along the waterfront, effectively stealing the view from the rest of us. Don’t get me wrong, I am all for increasing Kingston’s population density in and around the downtown, however I’m not a fan of Kingston replicating cities such as Toronto and Vancouver who’ve forever lost their waterfronts. So in that respect, perhaps Anna Lane, the Queen Street United condo and North Block are passable as they don’t encroach the waterfront.  It will be exciting to see how our downtown grows and reacts to these condos, however we need to ensure that the new buildings do not detract from what makes downtown Kingston a great place to live, work and play.  Contributions and amenities such as parking, green space, commercial zoning, fair taxation and respect for the surroundings are all key ingredients to ensuring that these new addresses become integral parts of a thriving downtown scene.

Are you a fan of condominiums in downtown Kingston, or do you fear that they might take something away from our historic and scenic city?  Do you think that the proposed plans to increase population density are a good thing, or are you of the opinion that condos promote gentrification?  Lastly, would give up the lawn and white picket fence to live in a condo?  Please drop off your comments below.