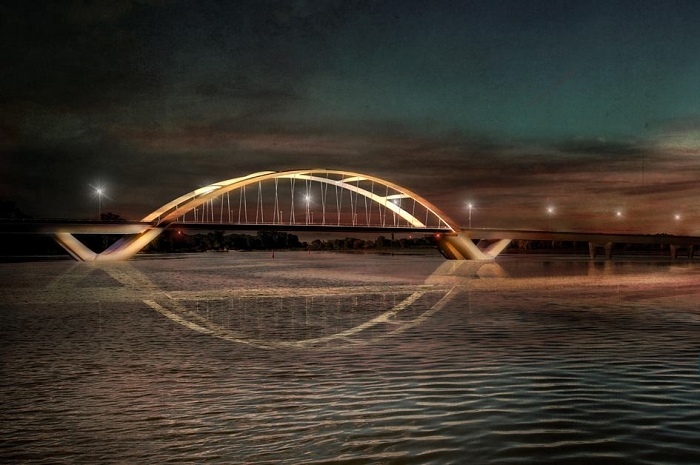 Well, it’s been nearly 5 decades in the making, but after countless studies and debates, Kingston is finally getting its third crossing. On February 21st, Mayor Bryan Paterson, MPP Sophie Kiwala and MP Mark Gerretsen announced that all three levels of government are on board to make contributions to fund the project. The bridge, that will cross over the Cataraqui River linking Elliott Avenue and Gore Road, is predicted to cost $180 million. The city, the provincial government and the federal government have all committed $60 million to see it through.

Supporters of the project are thrilled to hear that traffic often found on the LaSalle Causeway lift bridge will be eased with this alternative route from the east end to the west side of the river. While issues with the federally owned lift bridge itself, combined with accidents on the 401, have caused major traffic jams through downtown Kingston at times (and it seems more frequently than not lately), urban growth has also contributed greatly to the congestion.

Those opposed to the bridge are fearful of the environmental impact the construction of the new road could have, and have argued that alternatives such as improving public transit and bike lanes could go a long way to fixing the problem before resorting to digging holes in the river and displacing wildlife.

Love it or hate it, it’s happening, and construction is slated to begin in the second half of 2019. So, considering this apparent done deal, we’re now pondering what to call the new bridge. Much like the LVEC of 2008, chances are good that the name “Third Crossing” is not going to stick. Naming new builds in Kingston has been a hot topic of late and we’re sure that won’t end with this project. So, this week we’re wondering:

What should Kingston name the Third Crossing?

While the bridge is still in the early planning stages and construction is a year away, it’s never too soon to start thinking about what to name it. Like a new child, it’s important to take the time to ponder the options and feel them out so you know what feels and sounds right to you – and take it from me, that task can take a lot of time and discussion. So what do you think? Should we give this bridge the name of a person, place or thing? Should we come up with something completely new and unique – perhaps something that represents the times? In 1999, Strait Crossing Group, the firm that built the Confederation Bridge between mainland New Brunswick and Prince Edward Island, proposed a partnership with the city to build what they called the “Millennium Bridge”. While we’re well past that era (boy, this really has gone on, hasn’t it?) perhaps there is something more suitable for today.

As always, we’d love to hear your thoughts, so tell us what you think about naming the new bridge by dropping off your comments below.

Three years later, The City of Kingston has started the naming process for the Third Crossing, whose is well underway. They will consult with Indigenous communities and nations, and have a short list of names for public feedback by May 2021.

12 thoughts on “Naming The Third Crossing”