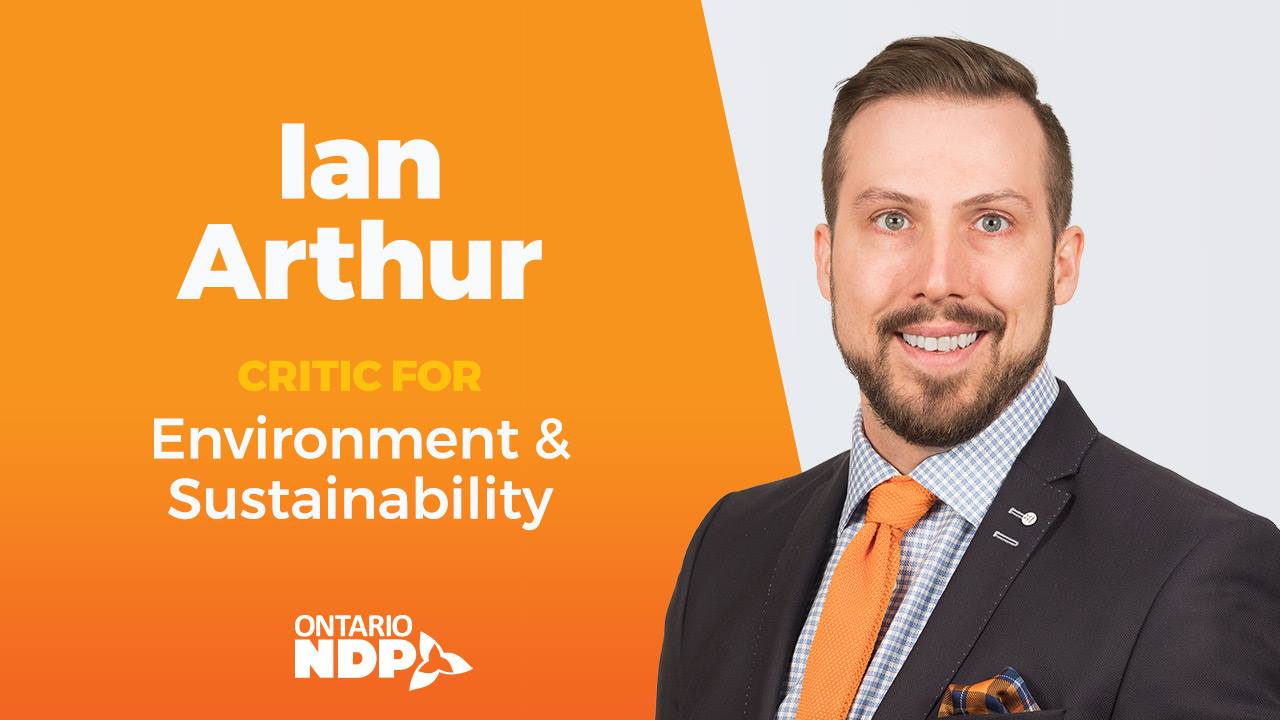 Kingston and the Islands’ MPP Ian Arthur will certainly be busy in Queen’s Park having recently been appointed the environment and sustainability critic for the Ontario New Democrats.

Ontario NDP leader Andrea Horwath named the deputy leaders and critics for the party on Thursday, Aug. 23, 2018. Rather than assigning critic portfolios directly to government ministries, Horwath “assigned each member of her team to focus on the real needs and concerns of families across Ontario, like mental health and addictions, housing affordability and economic development,” according to an official statement from the Ontario NDP.

For our MPP, taking on the role of environment and sustainability critic seems like a natural fit, as it is a role that involves a number of things he’s passionate about, Arthur expressed.

“This is something I’ve been passionate about for a long time,” he said, pointing to his long-standing connections with the local agricultural community due to his previous career as head chef at Chez Piggy.

“It’s an incredible honour and I’m so happy that Andrea asked me to do that, and I think that it’s going to be a huge amount of work, especially with this government, but I am very much looking forward to working on these issues. They’re things I have cared about for a very, very long time.”

Right out of the gate, Arthur found himself immediately thrown into action, as it was reported the Ford government had requested ministries to refrain from using the term ‘climate change.’ (The Ford government has since said that the emails that were allegedly sent out to a number of different ministries were ‘a mistake,’ though little has been said to clarify what that means.)

Arthur released a statement on Saturday, Aug. 25 to address the issue, one of a number of issues pertaining to the environment and sustainability that have emerged under the direction of Doug Ford, Arthur explained.

“I’m skeptical of what this government is going to do in terms of climate change. They’ve already indicated they’re cancelling the cap and trade program, and all the environmental programs that were associated with the Green Ontario program – I’ve had hundreds of emails from people negatively affected by that, and the cancellation of the electric car subsidy,” Arthur said.

“I think it’s reflective of the chaos that this government is creating.”

Arthur also noted that the other recent news that the Ford government will not be making ministerial mandate letters public is even further indication of a lack of transparency.

“So now we don’t know what the mandate letter to the minister of the environment actually said,” he said, the outrage in his voice obvious.

“There’s no transparency there. They’re the government of the backroom deal.”

Working as the environment and sustainability critic will allow him to address issues that he’s been following for quite some time, Arthur said. His relationships with local farmers have allowed him to see firsthand the problems climate change has posed for local agricultural workers.

“One of the farmers on Howe Island told me a story of how far she had to drive to get hay to keep her dairy herd alive, and how much that added in terms of costs for her business, just because, during the bad drought, she can harvest any hay, so she can’t sustain her herd on her own.”

That one issue alone – the lack of hay following a drought – leads local farmers to have to drive to find hay, which is by that time in such high demand, the prices are raised, and farmers then have to compete with one another in order to feed their herds, Arthur explained.

“And that’s just one of the issues associated with climate change,” he said.

Arthur is also interested in opportunities for growth, and looks forward to working on creating more growth and jobs within the green economy, he said. Overall, he is pleased with his assignment, and said that he, and his fellow NDP MPPs, all have a lot of work ahead of them.

“There are so many issues to work on… I could talk for hours about all of the environmental issues I’m looking forward to working on,” he said.

“We have one of the strongest oppositions that this province has seen in a generation, the largest official opposition in a generation. We’ve held this government to account already and we’re going to continue holding them to account,” Arthur continued.

“They’re incredible people and it’s so amazing and such an honour to get to go to work with these people every single day. And I know that in all of the critic positions that were handed out, all of the NDP MPPs will be working very, very hard to hold this government to account.”