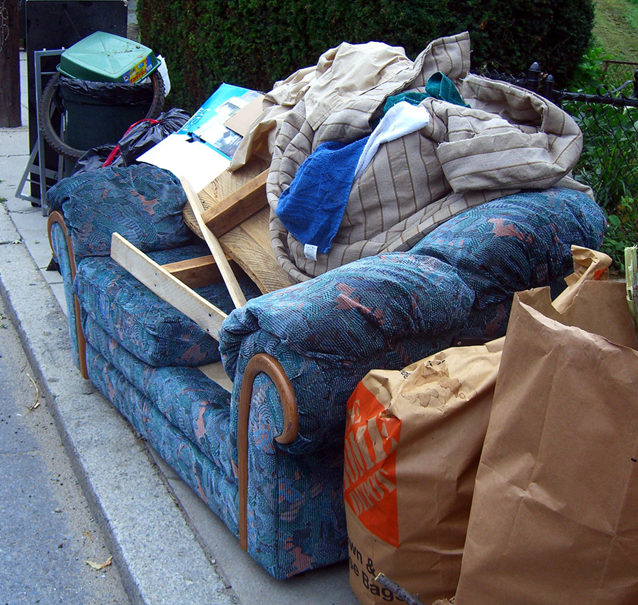 Over the past few weeks, I’ve noticed a steady increase in the number of Queen’s, RMC and St. Lawrence students wandering around and enjoying our construction riddled downtown.  Not only is the nice weather coaxing these young scholars away from their academic pursuits, but the increased outdoor activity is also the result of classes being over.  Going for a stroll along the waterfront, re-energizing with a coffee or grabbing a late night bite are all great ways to break up the painful task of cramming for that next big exam.  But all good things must come to an end, and as post-secondary students inch closer to the final days of examinations, one thing is for certain: moving day is nearly upon us.

While Kingstonians living in the west and east parts of the city are far removed from this disorganized chaos, the rest of us get to watch the train wreck happen in super slow motion.  Prior to purchasing a house a few years ago, we lived on the fringe of what is considered the Student Village Ghetto.  During that time, I witnessed student-filled moving vehicles stop and unload unwanted garbage and furniture in parking lots and next to privately controlled dumpsters.  Scenes like the one depicted in today’s photo (provided by: WalknBoston) used to be commonplace after all the moving was done.  However, the post-move residue seems to have improved over the last few years.

In my opinion, a lot of credit for the clean up has to go to the City, who finally decided to enforce long standing bylaws governing illegal disposal and terribly unkempt properties.  This put pressure on property owners, landlords and tenants to clean up, or else.  The or else results in a $5,000 fine for illegal dumping, while an untidy lawn could earn property owners a $125 addition to their property bill.

After my recent trip to the Kingston Area Recycling Centre (KARC), I was reminded that regardless of when your weekly collection date falls, you can drop off blue and grey bin recycling items almost any day of the week except for Sunday.  Further, the neighboring Kimco facility is also open to accepting everything from refrigerators to shingles, couches and mattresses.  In the event that you have furniture that’s not quite ready for the landfill, CFRC is also hosting their a Garage Sale this Saturday.  When it comes time to clean out your pantry, fridge or closet, there are a slew of organizations who are more than willing to accept what you no longer need:

Last but not least, after you’ve finished moving refrigerators and cinder blocks up and down countless flights of stairs, why not check out the Kingston Road Runner’s Association’s races and fun runs on Saturday and Sunday. Who needs beer and pizza after an entire day of back breaking labour for ungrateful acquaintances when you can lace ’em up and set a new personal best for the 10km.