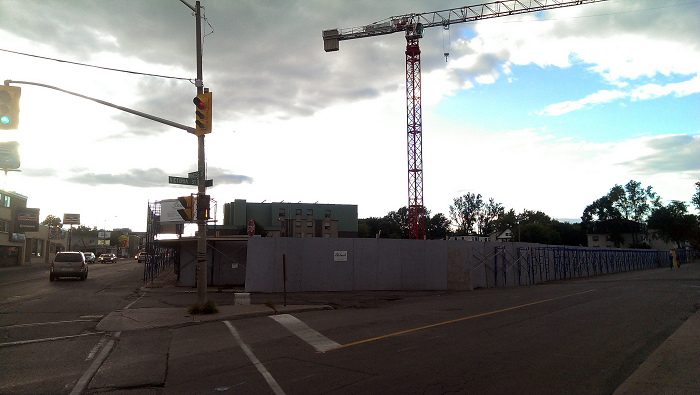 2014 marked another busy and somewhat unpredictable year for Kingston’s condominium and student housing market. Promising projects already in the works such as Anna Lane were temporarily stalled as the developer fell behind certain contractual obligations, then handed over the reigns to Doornekamp Construction Ltd. who will ultimately oversee completion of the 115-unit, nine-storey building by Summer 2015. BPE Development’s ambitious transformation of Queen Street United into The Tower continues to show signs of life, however actual development of this luxury condo has not yet commenced. New developments such as The Edge, Patry Inc’s massive rental property, literally rose from the ashes of the developer’s previous efforts at 663 Princess, which famously burned to the ground in late 2013. Further down the road, Podium Developments’ boutique sales trailer has already begun to sell out University Suites, two ultra-modern, investor-geared condos that are split by Princess Street. Of course, no conversation about towering residential development in Kingston would be complete without mentioning Homestead’s latest property, The Herkimer, which is tucked into the back corner of the Leroy Grant community. Considering the unique architecture, amenities, and operating models of each of these projects, this week’s poll question asks:

Kingston's most exciting new condo or apartment development is:

Developers and property managers involved in these projects seem to be stepping up their game and pulling out all the stops to attract tenants, home buyers and investors alike. For instance the brains behind The Edge have been offering limousine shuttle service to ferry in prospective renters to view model suites, while those who actually sign on the dotted line are offered their choice of a free 50″ television, Playstation 4 or XBox 360. Aside from signing bonuses, traditional upgrades such as in-suite laundry facilities, dishwashers and the like have seemingly become the norm. Such features and tactics may appear to be simple sales gimmicks, however their prevalence represents a dramatic shift, specifically within the student rental market. With outlandish amenities including private study rooms, yoga studios and gourmet coffee shops, these new players will undoubtedly have an impact on the city’s student rental landscape.  However, will they actually affect the bottom line of the traditional “slum lord”?  Love them or hate them, these exciting condominiums and massive student apartment complexes will play an important role in revitalizing and contributing to the sustainability of downtown Kingston.

Which of these projects caught your attention for the right or wrong reasons?  Do any of these condos or apartments have you considering making a move into a more sophisticated rental, or otherwise downsizing and embracing condo life in Kingston?