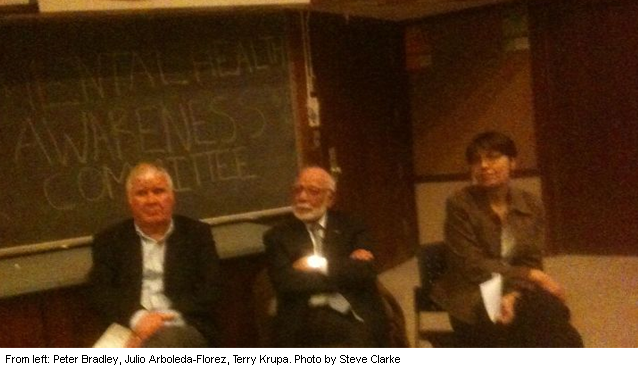 The Queen’s Mental Health Awareness Committee shined a spotlight on the issue of mental health screening in the workplace last Thursday evening when it hosted a discussion/debate at Stirling Hall featuring three academic experts on the subject.

Around two dozen audience members enjoyed free pizza as the panel addressed the central question: is mental health screening for workers necessary, or discriminatory?  Though the speakers came from different backgrounds, their responses were equally nuanced and thoughtful.

First up was Royal Military College psychology professor Peter Bradley.  With 33 years in the Canadian Forces and 13 years on the RMC faculty, Bradley brought a clear military voice to the proceedings.  Specializing in moral psychology and combat psychology, his research on the impact of military culture in ethical decision-making and the mental health of snipers indicated the direction of his Queen’s lecture.

“The screening that we do at the front end to take people into the military is mostly…based on physical and cognitive attributes,” said Bradley.  “The test that you get at the recruiting centre is largely a test of learning ability – it’s an IQ test, essentially.  Then we send them to a doctor to make sure that you’ve got all the physical attributes that you need to do the physical part of the job.  So we don’t do mental health screening per se; there’s no test administered until you get into that more specialized employment.”

Screening soldiers before and after deployments lies at the heart of CF mental health policy.

“Not to get too carried away with myself,” said Bradley, “but I think a good part of why we’re doing that is because we have a social responsibility to our people.  When we take young men and women into the military and put them into harm’s way, we know that some of them are going to be affected by this.  It’s an occupational hazard, and so we have a social responsibility to minimize those hazards as much as possible.  And if they do get affected by it, then we introduce some treatments.”

Bradley showed the audience statistical information on the mental health of soldiers in war zones and concluded that snipers were generally more troubled by combat experience than other soldiers because they tended to have more of it.  He said there is still a certain stigma in the military towards accessing mental health services, but closed with a significant quote from World War II general Omar Bradley (no relation): “For unless one values the lives of his soldiers and is tormented by their ordeals, he is unfit to command.”

Following his segment, the focus turned to civilian employment with a presentation by Terry Krupa, researcher in the “Disability and Wellness in the Community” stream at the School of Rehabilitation Therapy.  An occupational therapist, Krupa deals with issues of productivity and employment.

While supportive of mental health screening to get people the treatment they need, Krupa acknowledged there might be problems of implementation and effectiveness.  For example, would wide-range screening before post-secondary education reduce suicides?  There is no solid evidence that it would, despite the exorbitant cost such screening would entail.  There might also be privacy concerns; children diagnosed with mental health problems could be treated differently by teachers.

Then there is the thorny issue of where screening for employment purposes would take place – most likely places where the general population goes for health problems, such as a family doctor’s office.  Furthermore, the tests used in mental health screening are very sensitive.  If more people are forced to undergo screening, the system might pick up more false positives, diverting resources to people who don’t need them.

Krupa underscored the importance of intent in mental health screening: is the intent to keep people out of certain occupations?  Certainly, some workplaces induce more emotional strain than others.   But in Krupa’s opinion, there is no occupational category that a person with mental health issues cannot adequately fill (with certain critical exceptions, such as commercial airline pilot).

One of the reasons human resources departments tell employers to do screening after hiring is to look for ways to accommodate workers with mental health problems, since the high-pressure nature of modern work makes more people susceptible to mental illness.  According to Krupa, 45% of disability claims in Canada are related to mental health.

Last up was Dr. Julio Arboleda-Florez, professor emeritus from the Department of Psychiatry and president of the World Association for Social Psychiatry.  Arboleda-Florez has done clinical research on post-traumatic stress disorder in his native Colombia – a country torn by civil war for 45 years – that affected not soldiers, but the general population.

The professor had two main concerns with mental health screening in the workplace.  Firstly, one has to figure out the purpose of the screening and the intended use of the data.  Can we afford to provide those services to the population?  We are currently unable to do so even for the most common conditions: while one-quarter of Canadians suffer from some type of mental illness, 66% of that group has no access to mental health services.

The second concern was stigma and discrimination.  Stigma, said Arboleda-Florez, is a personal attitude.  Society tends to look down on the mentally ill; we see them on the streets, think they smell bad, are afraid they’re violent and dangerous.  Arboleda-Florez argued that people with mental health issues are stigmatized out of fear, although there is also a certain double-standard at play: we do not perceive ourselves in the same manner that we perceive others.  We may be mentally ill ourselves, yet if we see someone else who looks mentally ill we feel free to discriminate.

He offered some suggestions on how to combat such negative perceptions.  Arguing that simple human contact was the most appropriate way to bridge the divide, Arboleda-Florez advocated bringing schizophrenics to schools and having them talk about their conditions, allowing youth to better understand mental health problems.  Above all, he implored his audience to speak up for the mentally ill, since their condition effectively robs them of a real voice in the public sphere.

Arboleda-Florez saw mental health screening in the workplace as largely discriminatory and, to prove his point, cited famous world leaders who were not entirely sane.

“Napoleon was totally mentally ill, paranoid as hell,” he said.  “Poor Mr. Churchill suffered from these horrible depressions, and he always doubted whether he could lead his country to war or to victory.  Our…friend here Mackenzie King, he was always talking to his dead mother in the middle of the Second World War when we needed a leader…so do we screen for them?  No, we didn’t screen for them.

Sarah Hirji, the 21-year-old MHAC chair who introduced the speakers, agreed.  She viewed mental health screening as essentially counterproductive: “there’s no point in increasing the stigma, and it really just makes matters worse.